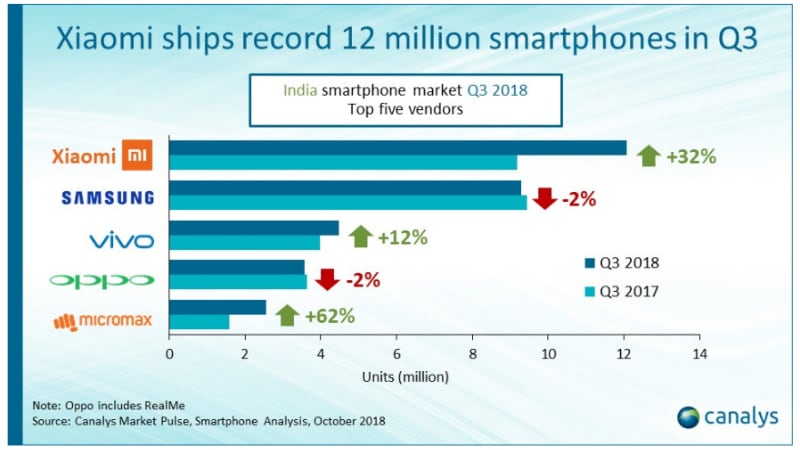 Xiaomi saw an annual growth of 31.5 percent in the country

Vivo saw a steady annual growth of 12 .3 percent with 4.5 million shipments and 11.1 percent market share. In Q3 2017, Vivo managed to ship 4 million units and raking in 9.8 percent market share only. Oppo came in fourth with 3.6 million shipments, will annual shipments falling by 24 percent. The report states that the decline of the vendor eased to 2 percent partly due to the strong performance of its secondary brand 'Realme' which managed to ship 80,000 units in Q3 2018.

Micromax also made a surprise entry into the top five vendors with 2.6 million shipments in Q3 2018 - giving it a 6.3 percent share, from 3.9 percent in the same quarter last year. It raked in an annual growth of 61.5 percent, with the vendor shipping five times as many smartphones this quarter as last quarter. The report states that this is Micromax's best performance in recent years, and the credit is strongly given to the government order from Chattisgarh, where it decided to provide smartphones and Jio connectivity at a fixed price of Rs. 2,510 to 5 million women and college students. Counterpoint's Q3 2018 report also placed it in the top five, with a 9 percent share.