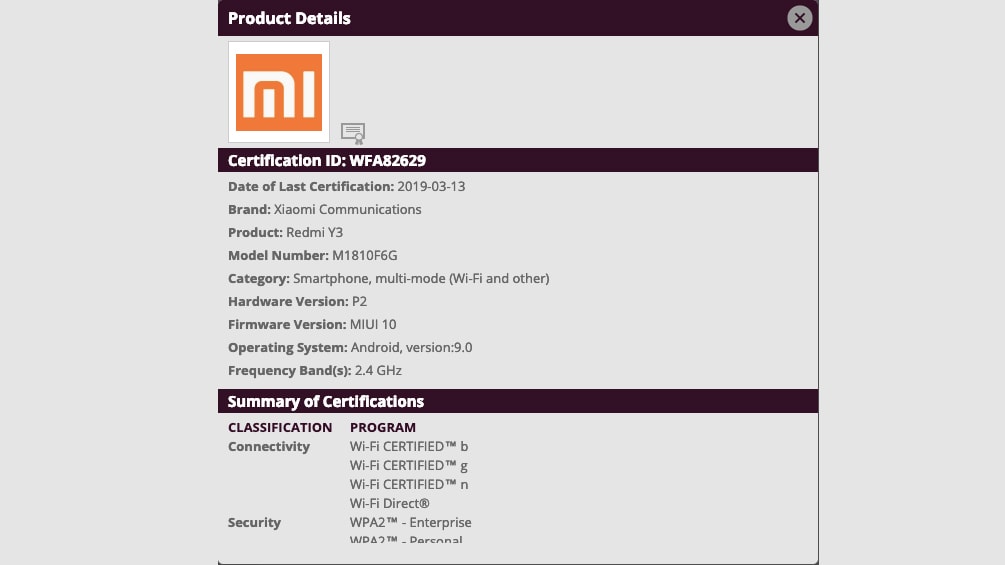 Xiaomi launched the new Y series in India a couple of years ago with the Redmi Y1 and the Redmi Y1 Lite. This was mainly a youth and selfie-focused series and had smartphones with a selfie flash. The Redmi Y2 was soon launched as the successor of the Redmi Y1 bringing in the total amount of smartphones from this series to three. Xiaomi seems to be working on a new smartphone for the lineup, the Redmi Y3 which has shown up for Wi-Fi certification revealing some details about the smartphone.

The Redmi Y3 has received Wi-Fi certification, a Wi-Fi Alliance listing confirms. The certification documents don't reveal a lot of information about the Redmi Y3 but what we do know is that the device has support for Wi-Fi 802.11 b/g/n. The phone bears a M1810F6G model number and seems to be running MIUI 10 based on Android 9 Pie like some of the other phones launched recently by Xiaomi. The Wi-Fi Alliance listed was first spotted by MySmartPrice.

Xiaomi launched the Redmi Y2 as the Redmi S2 in China and it is possible that the Redmi Y3 makes it to China as the Redmi S3. Since Xiaomi hasn't updated the Y series in India for a while, we can expect the company to bring it to India soon.

Xiaomi could offer a better selfie camera on the Y3 compared to the 16-megapixel AI camera on the Redmi Y2. It'll be interesting to see when Xiaomi brings to India and at what price considering the Redmi Note 7 is priced at Rs. 9,999.