Market research firm International Data Corporation (IDC) has come out with its quarterly mobile phone tracker which claims that Xiaomi's Redmi Note 4 was the highest shipped smartphone in Q1.

The firm adds that for the first time, a smartphone from a China-based company became the highest shipped smartphone. Xiaomi Redmi Note 4 replaced Samsung Galaxy J2, which was the top model in Q4 2016.

The Chinese handset vendors, continuing their form since Q4 2016, again dominated the Indian smartphone market with Xiaomi, Vivo, Lenovo, and Oppo making it to the top five. Samsung, however, remained on top with 28.1 percent market share. Xiaomi was at second spot with 14.2 percent market share while Vivo attained the third spot with a percent of 10.5 percent. Lenovo and Oppo were fourth and fifth vendors with market share of 9.5 and 9.3 percent respectively.

For Samsung, IDC says that multiple launches in Q1 2017 including J2 series, C9, and A-series (2017 version) contributed over a million units. Xiaomi managed to retain second spot thanks to the Xiaomi Redmi Note 4 and Xiaomi Redmi 4A launches. IDC adds that the launches also helped the company to lead online smartphone shipments with 40.6 percent share. 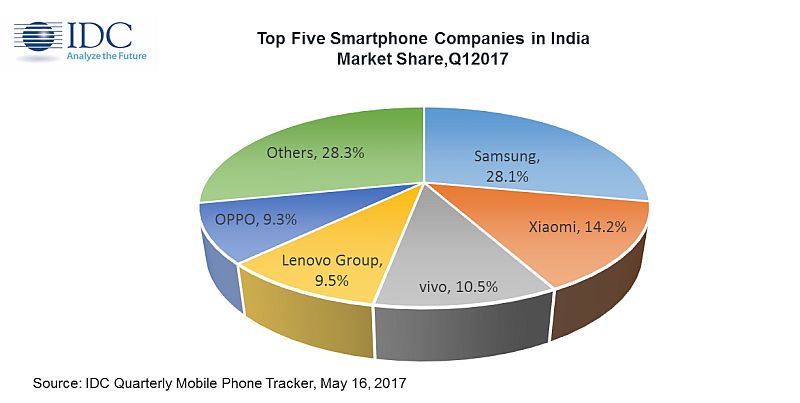 Vivo surpassed Lenovo and Oppo to become third, and was strengthened by launches in around $150 price segment. Lenovo remained flat in the quarter as the company struggled with its expansion for presence in the offline channel. Oppo is claimed to grew 14 percent in Q1 2017 over the previous quarter, and almost doubled over the same period last year.

"Though, homegrown vendors are making attempts to recapture the lost ground with new launches in sub-US$100 as well as in the mid-range segment. But intense competition from China-based vendors continues to be a major challenge and is expected to increase in coming quarters. Recovery of homegrown vendor is necessary for Indian smartphone market not only to fill-in the vacuum created for last few quarters but also to fuel the feature phone to smartphone migration," said Jaipal Singh , Market Analyst, Client Devices, IDC India.