Xiaomi's yet-to-be-announced Redmi Note 2 Pro smartphone, which we have already seen in numerous leaks and rumours, might finally see the light of the day as soon as November 24.

The possible launch date comes from the teaser image posted by the company on its Weibo account on Tuesday. The teaser image says 'Grand Finale' in Chinese, followed by the launch date but fails to mention anything about the smartphone. As per My Drivers website, the launch is scheduled to take place at the Beijing National Convention Centre. 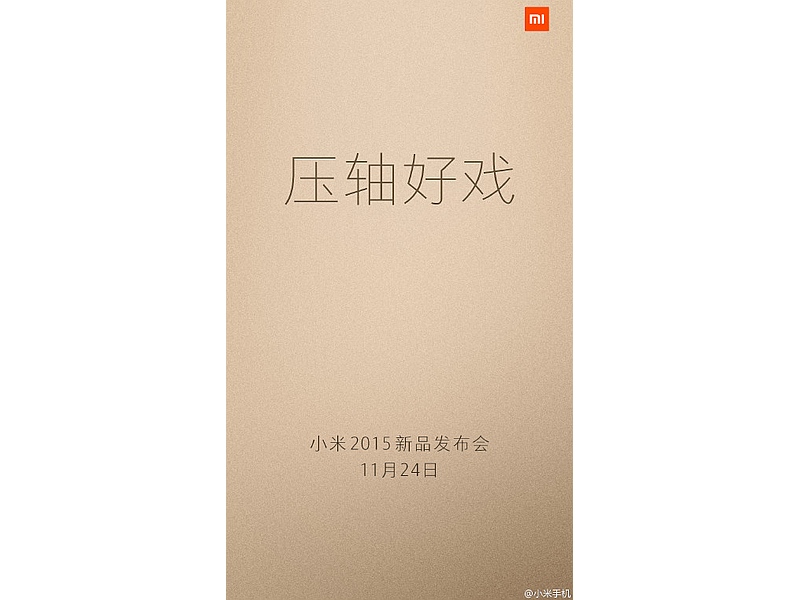 In-line with previous leak, the new leaked image spotted in Tenaa listing shows fingerprint scanner at the back panel. The Redmi Note 2 Pro is tipped to share the same specifications as the Redmi Note 2. The only difference would be an inclusion of a fingerprint sensor and a metal build.

An image showing the handset's rear metal case also got leaked on the Web. The image showed holes for the primary camera, LED flash, and one for what may be a fingerprint scanner. The leaked image also revealed that the volume rocker keys are on the right panel, and a Mi logo is present on the bottom.

Of course, with Xiaomi in the recent past sharing multiple teasers that did not lead up to an actual launch, the company may even launch the much-anticipated Xiaomi Mi 5 smartphone instead. A recent leak however tipped the Xiaomi Mi 5 to run Qualcomm's Snapdragon 820 SoC, and if that is correct, the smartphone may only hit retail shelves in Q1 2016, after the SoC is launched. Another report pegged December 3 to be launch date of the Mi 5, which remains a possibility if the launch and release are widely separated.