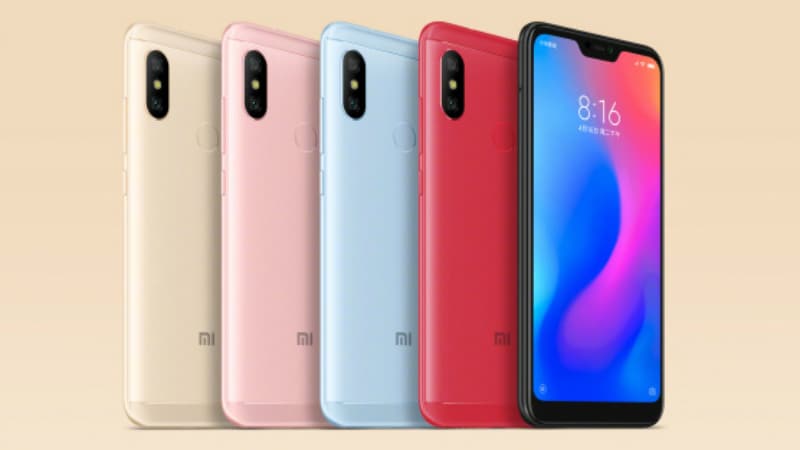 Xiaomi Redmi 6 Pro design and colour options have been confirmed ahead of its formal launch that is set for June 25 in a new series of official renders. The fresh revelation emerged days after a couple of images showing the iPhone X-like display notch on the new Redmi series handset leaked online. The new model is expected to debut as the most superior option in the Redmi 6 family that received the Redmi 6 and Redmi 6A last week. It is expected to feature a 19:9 display and come with a 4000mAh battery. Alongside the Redmi 6 Pro, Xiaomi is expected to bring the Mi Pad 4 later this month.

As per the renders released by one of Xiaomi's official Redmi Weibo accounts, the Redmi 6 Pro will come in multiple colour options, including Rose Gold, Sand Gold, Lake Blue, Black, and Flame Red. The renders also show that the back of the upcoming smartphone has a metal finish, while the front panel features a display notch, similar to the iPhone X and tons of existing Android devices. Further, there is a dual rear camera setup along with an LED flash and a rear-facing fingerprint sensor.

The design that has been confirmed through the formal renders was previously leaked in a couple of live images and surfaced on a TENAA listing. If we believe some earlier reports, the Redmi 6 Pro will come with a 5.84-inch full-HD+ display with a 19:9 aspect ratio. It is also rumoured to have 2GB, 3GB, and 4GB RAM variants and 16GB, 32GB, and 64GB of onboard storage. Furthermore, the handset could have a 12-megapixel primary sensor at the back and a 5-megapixel camera sensor at the front.

Similar to the Redmi 6 and Redmi 6A, the Redmi 6 Pro is likely to run Android 8.1 Oreo on top of MIUI 9. The handset could also receive MIUI 10 update sometime following the launch.

Xiaomi is also expected to bring the Mi Pad 4 alongside the Redmi 6 Pro on June 25. The new Mi Pad version is teased to come with an 8-inch full-HD display.