Xiaomi Redmi 5, Redmi 5 Plus will be launched on December 7 in China. The Chinese electronics firm made the announcement on Weibo, and the post refers to a 'full screen' display, something corroborated by the accompanying image. Xiaomi is evidently planning on launching the Redmi 5 and Redmi 5 Plus with 18:9 aspect ratio displays. Alongside, two variants of a new Xiaomi smartphone with an 18:9 display have also shown on up on the site of Chinese telecommunications certification authority TENAA, and it appears to be the Redmi 5.

As we mentioned, the Weibo post by Xiaomi doesn't reveal much about the Redmi 5 and Redmi 5 Plus, except their taller than usual 18:9 displays, and the launch date. However, the TENAA listings of the MDE1 and MDT1 shows a very similar smartphone, complete with a 5.7-inch HD+ (720x1440 pixels) 18:9 display. Presumably, with the increased height and removal of the hardware capacitive buttons, Xiaomi has managed fit a larger 5.7-inch display into a smaller frame closer to the original Xiaomi Redmi 4. The TENAA listing, first spotted by Fonearena, shows the smartphone to be significantly larger than the 5-inch display bearing Redmi 4 in terms of dimensions, despite seeming the forego the hardware capacitive buttons in front. Slashleaks also corroborates the Redmi 5 listing, with its own matching leaked renders and specifications. It adds a CNY 1,399 (roughly Rs. 13, 600) price, and claims the first sale will be on December 10. 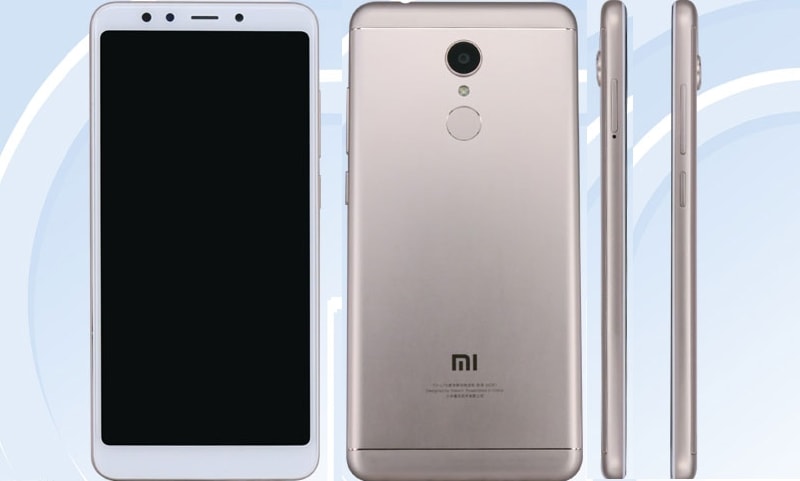 TENAA lists the MDE1 and MDT1, thought to be the Redmi 5, to sport a 1.8GHz octa-core SoC, which is speculated to either be the Snapdragon 450 or Snapdragon 625 - this latter seems less likely, as the Redmi 4 sported a Snapdragon 435 SoC and the company can be expected to follow through with another Snapdragon 400-Series processor.

The purported Redmi 5 listing on TENAA mentions three RAM options - 2GB, 3GB, and 4GB - as well as three storage options - 16GB, 32GB, and 64GB - which can be expected to correspond in individual SKUs. Storage is said to be expandable via microSD card (up to 128GB). The smartphone is listed with a 3200mAh battery - significantly smaller than the Redmi 4's 4100mAh offering. It is said to sport 12-megapixel rear camera and a 5-megapixel front camera. Dimensions are listed as 151.8x72.8x7.7mm, and a weight of 157 grams. The smartphone is listed to run Android 7.1.2, tipping an MIUI 9 build out-of-the-box. The fingerprint scanner can be seen on the rear panel.