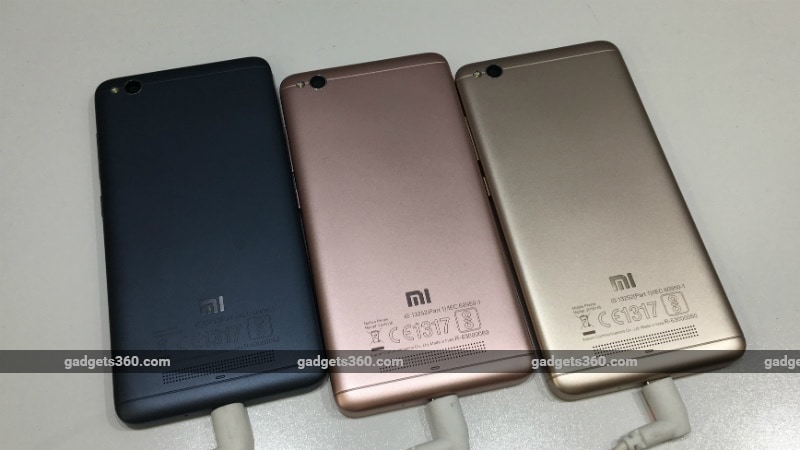 Xiaomi Redmi 4A smartphone has been launched in India at Rs. 5,999 at an event in New Delhi. The new Xiaomi smartphone will be sold only on Amazon India and Mi.com. Xiaomi Redmi 4A supports 4G VoLTE, has an IR blaster, and will run Android 6.0 Marshmallow.

Xiaomi Redmi 4A supports Reliance Jio's 4G VoLTE network, does not have a fingerprint sensor, and runs on the Android 6.0 Marshmallow-based MIUI 8 operating system. It will feature an IR blaster that allows buyers to use the smartphone as a TV remote. Xiaomi has said the smartphone will be launched in Drak Grey, Gold, and Rose Gold colours.

At the Redmi 4A India launch event, Xiaomi claimed it is the biggest smartphone brand in terms of online sales, with 30 percent market share. The company also said it has set up the second manufacturing plant in India (at Sricity, Andhra Pradesh), owned and operated by Foxconn; Xiaomi will have the capacity to manufacture one smartphone per second once the factory opens. This announcement comes within days of the company announcing that it has sold 1 million units of the Xiaomi Redmi Note 4 in the country.

Xiaomi Redmi 4A was launched at CNY 499 (roughly Rs. 5,000) in November last year in China, alongside the Redmi 4. Other smartphones in the Redmi 4 series include the Redmi 4 Prime and Redmi 4X.

Amazon Pilot Season Is Still Not Available Outside the US
WhatsApp Text Status Back on Android: Here's How You Can Get It