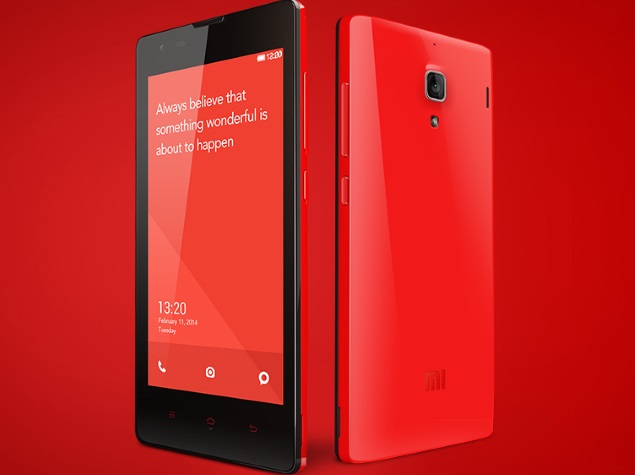 Xiaomi will on Tuesday hold the twelfth and possibly final flash sale for its budget Redmi 1S smartphone in India, on Flipkart.

As expected, the Chinese company on Monday launched its Xiaomi Redmi Note phablet and unveiled a 4G-LTE variant. The 3G Redmi Note will be sold through flash sales on Flipkart from December 2 onwards. Therefore, this will be the last week of Redmi 1S flash sales.

Xiaomi stated that it will bring back the budget Xiaomi Redmi 1S, but without giving an exact time frame. It's worth noting that the company had discontinued sales of the Xiaomi Mi 3 in India to focus on the Redmi 1S. We can expect that the company is repeating the same strategy with its Redmi Note phablet.

The Chinese company has not yet announced the number of Redmi 1S (Review | Pictures) units, priced at Rs. 5,999 each, that will be available in Tuesday's flash sale.

The Chinese handset maker, in its last tweet about the Redmi 1S, had asked interested buyers to register for the sale. Registration will be open till midnight on Monday. Xiaomi has also confirmed that a complimentary screen protector and Micro-SIM card adapter will be bundled this time. The flash sale on Tuesday will kick off at 2pm IST for registered users.

The Flipkart registration page notes that only one unit will be allowed per registered email ID, and also advises users to log in at least two hours before the flash sale begins.

It's worth pointing out that Flipkart's procedure requires people to just add the handset to their cart for it to be classified as a sale, after which they are given additional time to complete the checkout process.

At the Redmi Note launch, Xiaomi revealed that it has sold over 5,00,000 Mi 3 and Redmi 1S smartphones in India so far, though without giving a breakup of units.

The company's current flagship, the Mi 4, can be expected to be announced during Q1 2015. On being asked about reasons for the delay of the Xiaomi Mi 4 launch in India, representatives said the company is still busy testing the handset and obtaining certifications.