Xiaomi, the Chinese smartphone maker that has been under the spotlight for its handset sales issues in India, appears to have allowed the much-anticipated successor to the Redmi 1S to pass through the closely-watched AnTuTu benchmarks.

The smartphone, codenamed Xiaomi HM2014811 and anticipated to be called the Redmi 2S, is seen to sport a 4.7-inch HD display and run on Android 4.4.4 KitKat. It is powered by a 1.2GHz quad-core Cortex-A53 LTE-enabled 64-bit Qualcomm Snapdragon 410 processor with Adreno 306 GPU, and features 1GB of RAM. Also, the rumoured Redmi 2S includes an 8-megapixel rear and 2-megapixel front-facing camera. 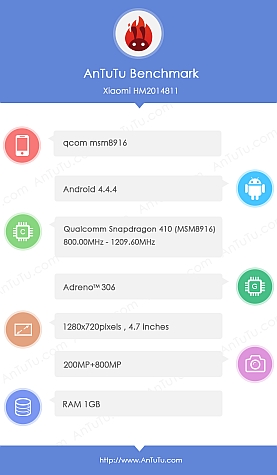 Notably, a Xiaomi device named 'Millet 2014811' was spotted last week on the Tenaa certification website. The smartphone listing also detailed similar specifications, such as the 4.7-inch display, and added that the device measures 134x67.21x9.2mm and weighs 132 grams, which is 26 grams less than the existing Redmi 1S. The Tenaa listing also showed the handset to house 8GB of internal storage expandable via microSD card (up to 32GB), 4G LTE connectivity, and a 2200mAh battery besides the aforementioned specifications from the AnTuTu benchmarks.

Xiaomi, soon after being permitted to import and sell Qualcomm chipset-based handsets in India, announced earlier this week that it will hold a flash sale on December 23 (Tuesday) for the budget Redmi 1S. The announcement came via Hugo Barra's post on Facebook.