Share on Facebook Tweet Snapchat Share Reddit Email Comment
Xiaomi has announced that it will hold two separate flash sales for its budget Redmi 1S smartphone and LTE-enabled Redmi Note 4G on Tuesday. This is the first time that Xiaomi is holding flash sales for two of its smartphones on the same day. Xiaomi India Head Manu Kumar Jain announced the news on Twitter.

We will have sales of both Redmi Note 4G & Redmi 1S next week. Registrations for both will start at 6 pm today @ http://t.co/m9QOEselFp

As before, the Xiaomi Redmi 1S will be available via Flipkart at Rs. 5,999, while the Xiaomi Redmi Note 4G at Rs. 9,999, and registrations for both the smartphones that make consumers eligible to participate in the sale will end at midnight on Monday. As of now, Xiaomi has not revealed how many units of the Redmi 1S and Redmi Note 4G will be going on sale on the day. 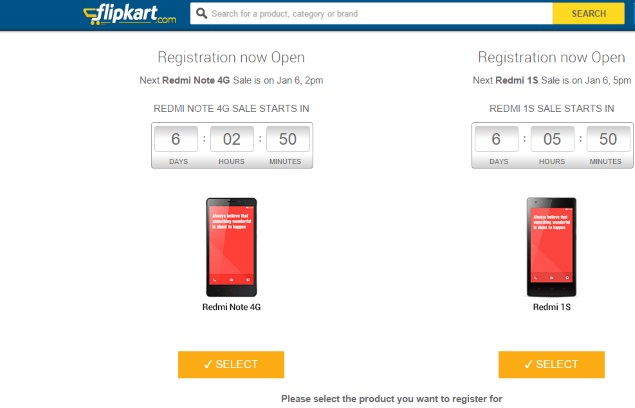 The Flipkart's Mi page notes it will limit orders to one phone per registered email ID per sale.

The first flash sale on Tuesday for the Redmi Note 4G phablet saw 40,000 units of the smartphone going out of stock on Flipkart within six seconds of becoming available.

The Redmi 1S, on the other hand, went on sale last week after the company received some relief from the Court to sell handsets based on Qualcomm chipsets in India.

To recall, Xiaomi's imports and sales of its smartphones were banned earlier this month with an injunction order served by the Delhi High Court due to a plea by Ericsson, which claimed the Chinese manufacturer was infringing on its Standard Essential Patents (SEPs) and refusing to pay licensing fees.

Under the injunction order (following Xiaomi's appeal), the Chinese manufacturer was allowed to import and sell handsets that run on Qualcomm-based chipsets, such as the Redmi 1S and Redmi Note 4G.