Samsung Electronics has lost its crown as the top smartphone seller in India for the first time in six years, as it was outsold by China's Xiaomi in the final quarter of 2017, data from two tech research firms shows.

The Chinese company, which is exploring a public listing and is now valued at close to $100 billion (roughly Rs. 6.34 lakh crores), entered India just over three years ago.

Its strategy there has so far rested on flash sales on leading homegrown e-commerce player Flipkart and US tech giant Amazon.com's Indian site, an approach that helped it snatch market share without have to spend heavily on marketing.

Counterpoint pegged Xiaomi's smartphone market share in India at 25 percent in the fourth quarter based on shipments, ahead of Samsung's 23 percent. Lenovo, Oppo and Vivo came in behind them, each with about 6 percent market share. 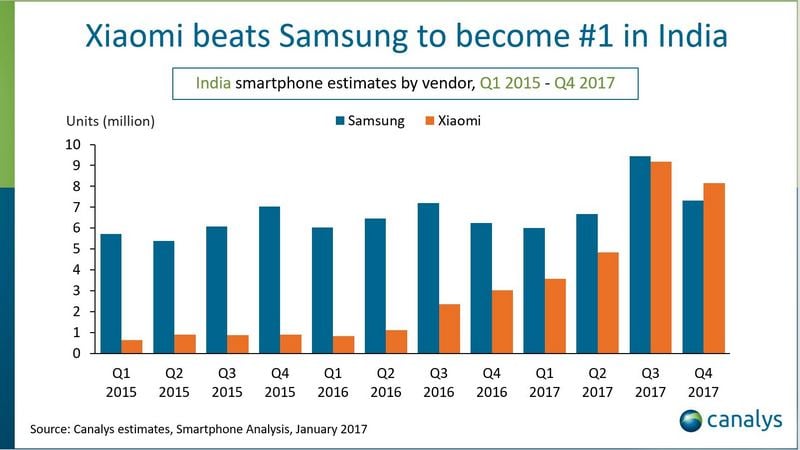 However, it ranked Samsung as the top seller for the year as the South Korean company was well ahead of Xiaomi in the first half of 2017.

"Multiple factors have contributed to Xiaomi's growth, but the key reason for its current success lies in the autonomy that it granted its Indian unit, letting it run the business locally," said Canalys analyst Ishan Dutt.

Canalys estimates Xiaomi has 27 percent of the Indian market while Samsung is on 25 percent.

The South Korean company has been unable to win over cost-conscious buyers, thereby losing market share in the sub-15,000 rupee ($235) segment to Xiaomi quarter after quarter, he said.

Samsung said in a statement that it led Indian smartphone sales in the September to November period, based on data by research firm GfK.

A Samsung India spokesperson said, "Samsung is India's number 1 smartphone company by a distance. As per GfK, which tracks sales to end consumers, in the last (November) quarter Samsung had a 45 percent value market share and 40 percent volume market share. Samsung is a full range player and leads the smartphone business across every segment of the India market in 2017. More importantly, Samsung is India's 'Most Trusted' brand. We owe our undisputed leadership to the love and trust of millions of our consumers in India."