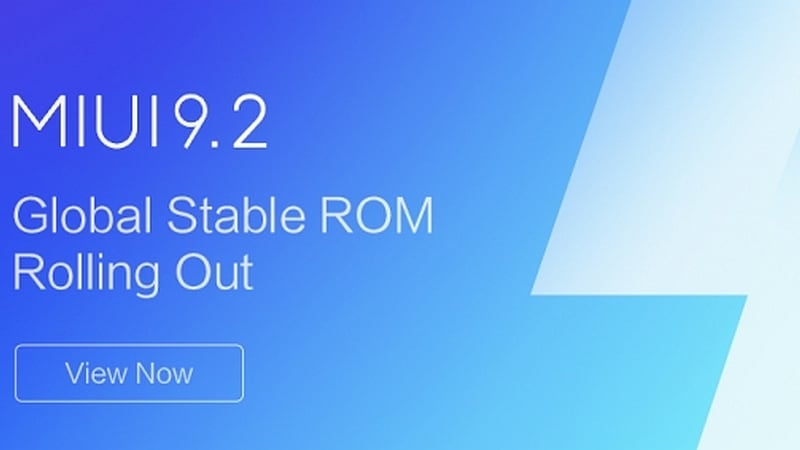 Xiaomi has started the rollout of MIUI 9.2 for most recent Xiaomi smartphones that are on MIUI 9 already. According to the new changelog, MIUI 9.2 update includes new features such as Mi Mover, a new app lock, a distance sensor dynamic calibration function, simplified UI, among others. The update is rolling out for the Redmi 5A, Redmi Y1 Lite, Redmi Y1, Mi Mix 2, Redmi 5, Redmi 5 Plus, Redmi 4 Prime, Mi 3, Mi 4, Mi Note. Several users also report that the update also brings the much-awaited App Vault feature.

According to a MIUI forum post, the MIUI 9.2 global stable ROM has started rolling out for the above mentioned phones. The Redmi 5A has already started receiving MIUI 9.2, as reported by users on Twitter. The highlights of the update include a new Mi Mover feature for better data migration, a simplified UI design, and optimisations to the icons section. System improvements in MIUI 9.2 include a new distance sensor dynamic calibration function. A few users also report that the App Vault feature, which is accessed by swiping right from the home screen and brings easy access to frequently used Shortcuts, apart from Notes, Calender Events, and Cricket widgets, is also rolling out with the update.

The App Lock on MIUI 9.2 now supports "hiding messages from selected apps." The home screen has also received several optimisations for clock widget supported themes, moving app icons into folders, and adding widgets to an empty spot. Additionally, there is a fix in the Gallery for image compression. Mi Account will get a reduced number of push notifications when user is signed out.

Apart from that, there are a couple of optimisations on Mi Drop such as fixing issues with loading big GIFs and time sorting for received files.

Other than the above mentioned list of phones, there is no information from Xiaomi on the timelines for MIUI 9.2 coming to the rest of the phones from the company's bandwagon.

To update to the latest version, users running MIUI 5, MIUI 6, MIUI 7, or MIUI 8 can update directly through OTA or by manually flashing the ROM. Xiaomi recommends backing up data to avoid any loss. Users on developer version cannot upgrade via OTA.