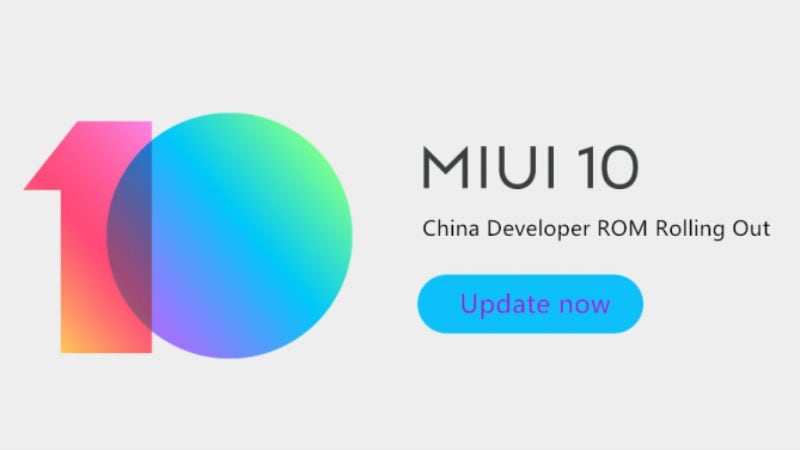 Xiaomi has started to roll out MIUI 10 China Developer ROM to eligible devices. The latest development comes only a few days after the Chinese mobile maker unveiled the Global ROM of MIUI 10 at an event in New Delhi. The list of compatible devices for the new MIUI China Developer ROM includes the Mi 8, Mi 8 SE, Mi 6, Mi 5, Mi MIX 2S, Mi MIX 2, Mi MIX, Mi Note 2, Redmi S2 and Redmi Note 5. The company originally announced the fresh experience for the Mi 6X users as well. However, it has now suspended the rollout for the 2018 smartphone. To recall, a few days back, the company started rolling out MIUI 10 Global Beta ROM to compatible devices after beginning to recruit beta testers. The company had also revealed timelines for the launch of the China Developer ROM, as well as a list of eligible devices.

As announced via a MIUI forum post, Xiaomi has kicked off the rollout of the MIUI 10 China Developer ROM. The new ROM, which carries version 8.6.19, includes a bunch of new developments, but Xiaomi has not updated the full changelog yet. Note, that this is the China Developer ROM, and it has a slightly different feature set than the Global Beta ROM.

In the last Global Beta ROM update, Xiaomi introduced an updated Mi Browser with an optimised start page, PWA (Progressive Web App) support, and better search functionality and App Vault with a World Cup card. Further, the update fixed Greek language localisation. However, the features that come in the China Developer ROM will only be available in China and the Global ROM might be a little different.

Xiaomi has informed that the recruitment of beta testers for the second batch of devices will start soon. As of now, if you have any of the compatible devices, and are already running a beta ROM, you can check for the latest MIUI 10 China Developer ROM by going to Settings > About phone > System updates > Check for updates. You can also go to 'Updater' and check for updates. If you are using MIUI 6/ MIUI 7/ MIUI 8 stable ROM, you can upgrade to MIUI 10 via the fastboot method, via download links.

Google Maps 'For You' Tab Starts Rolling Out to Some Users
Small Businesses Vulnerable to Cyber-Attacks, Then Don't Act: Hiscox