Lei Jun, Xiaomi CEO, revealed the handset at an event in Beijing and stressed that smartphones are at the centre of its strategic goals. Jun also claimed that the new Mi Note is the "best looking phone in the company's history." Additionally, Jun at the event also showcased Mi Headphones that will cost CNY 499 (roughly Rs. 5,000).

Jun also revealed that the new Xiaomi Note features a 2.5D glass at the front while the back features 3D glass for protection. The phablet is just 6.95mm thin and weighs 161 grams.

The Xiaomi Note phablet features a contrast ratio of 1400:1 and auto-adjusts dynamic contrast pixels. For the areas more exposed it reduces contrast, while for lower exposure it increases contrast. It also packs an anti-glare display. The phablet sports a 13-megapixel rear camera with a six-element lens, OIS, a Sony CMOS sensor, and two-tone flash from Philips. There is a 4-megapixel front-camera also onboard with large 2-micron pixels. The Xiaomi Mi Note also sports a dedicated chip for audio (ESS ES9018K2M) and the company touted that it sports "highest quality of audio on any phone". It offers 24-bit/192KHz lossless playback support. 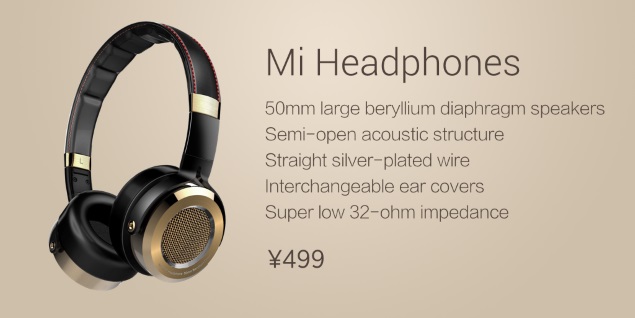 The Mi Headphones are semi-open headphones with 50mm beryllium diaphragm speakers and interchangeable over-ear and on-ear covers. It features a low 32-ohm impedance, and a silver-plated straight cable.