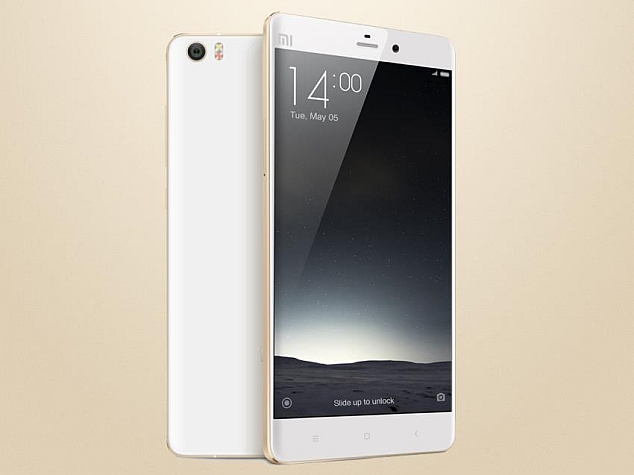 After announcing it back in January, with mass production due to begin in March, Xiaomi has finally launched the top-end Mi Note Pro phablet - making it available to buy in China from May 12 at CNY 2999 (approximately Rs. 30,700). Company CEO Lei Jun, who launched the handset at an event in Beijing on Wednesday, did not reveal when the Mi Note Pro would become available outside the region.

The highlight of the Mi Note Pro is that it packs an octa-core 64-bit Qualcomm Snapdragon 810 processor (four Cortex-A57 cores clocked at 2GHz, and four Cortex-A53 cores clocked at 1.5GHz) alongside 4GB of LPDDR4 RAM and Adreno 430 GPU. The company also detailed the performance of the Mi Note Pro by providing an AnTuTu benchmark comparison with two other Snapdragon 810-based smartphones, the HTC One M9 and LG G Flex2.

Xiaomi claims it is using v2.1 or the third edition of the Snapdragon 810, and worked with Qualcomm to refine the processor.

Xiaomi revealed some more details about the Mi Note Pro than it had announced at the January, such as the rear camera featuring an f/2.0 lens and Qualcomm 14-bit image processor, and new camera features such as flash 'suggest', auto-leveling, DSLR style peak focus indicator, and colour temperature adjustment. Also revealed was that the Mi Note Pro features hardware-optimisation for HiFi audio, specifically flac playback.

The Xiaomi Mi Note Pro features a 5.7-inch Sharp/JDI display with Sunlight Display technology and with a QHD (1440x2560 pixels) resolution offering a pixel density of 515ppi. The smartphone runs MIUI6 based on Android 5.0 Lollipop, and comes with 64GB of built-in storage without expandability via microSD card. It supports LTE Cat. 9 networks with download speeds up to 450Mbps.

Other specifications of the Xiaomi Mi Note Pro are identical to the Mi Note include a 13-megapixel rear camera with a six-element lens, OIS, a Sony IMX214 CMOS sensor, Qualcomm 14-bit image processor, and two-tone flash from Philips, and a 4-megapixel front-camera with large 2-micron pixels.

Xiaomi also flaunts the rear 3D curved glass build and a front 2.5D curved glass design of the phablet. It is backed by a 3090mAh battery with Quick Charge 2.0 technology, which charges the handset by 70 percent in an hour. The company also unveiled the 150-gram Mi Selfie Stick, priced at CNY 49 (roughly Rs. 500).

It is worth noting that Xiaomi on Tuesday held its first flash sale for the Mi Band fitness tracker. The wearable was announced in July last year and went on sale in August in China. According to the firm the Mi Band went out of stock in 7 seconds.