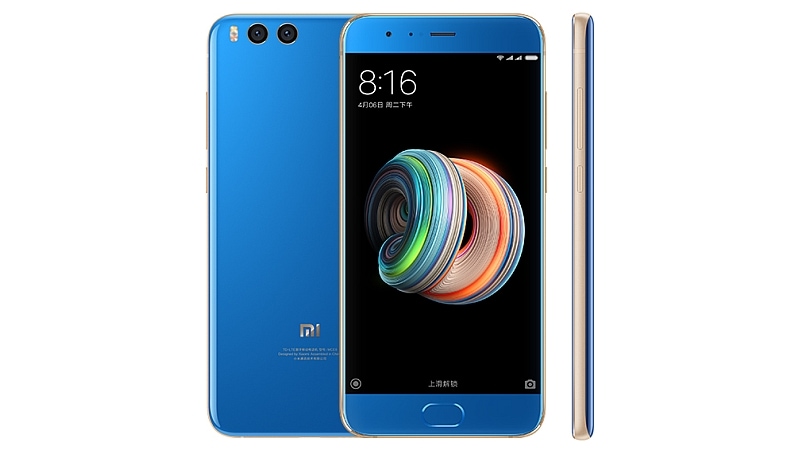 Xiaomi on Monday launched the Mi Note 3 smartphone, essentially a larger version of the Xiaomi Mi 6 launched earlier this year, with some minor differences. The company is touting Mi Note 3's newly developed AI-based Beautify feature, a 16-megapixel front camera, and dual rear cameras, apart from facial recognition unlocking and a 4-sided curved body. The smartphone will go on sale in from Friday, September 15, with bookings opening on Monday itself. Alongside the Mi Note 3, Xiaomi launched the Mi MIX 2 smartphone at the event.

As we mentioned, the biggest highlight of the Xiaomi Mi Note 3 is its 'Adaptable AI Beautify' feature, which the company says it has been working on for half a year. As the name indicates, the feature uses AI-based algorithms to beautify selfies, and has a different algorithm for men and women. The smartphone also bears a 7-Series aluminium alloy frame and a 4-sided curved glass body. The company is also touting the under-glass fingerprint sensor on the Xiaomi Mi Note 3, as well as the stereo speaker setup.

The dual-SIM (Nano-SIM) Xiaomi Mi Note 3 bears a 5.5-inch full-HD (1080x1920 pixels) display with a pixel density of 403ppi and a 94.4 percent NTSC color gamut. The smartphone is powered by a Snapdragon 660 SoC clocked at up to 2.2GHz coupled with 6GB of LPDDR4x RAM. It bears a dual rear camera setup (the same as the Xiaomi Mi 6) with a 12-megapixel sensor coupled with a wide-angle lens, f/1.8 aperture, and 4-axis optical image stabilisation, and the second 12-megapixel sensor coupled with a telephoto lens, and an f/2.6 aperture. The setup offers 2x optical zoom, and PDAF, apart from 4K video capture. The front camera bears a 16-megapixel sensor with 2-micron pixels.

The Xiaomi Mi Note 3 smartphone comes with 64GB or 128GB of inbuilt storage, with no expansion via microSD card. Connectivity options on board include 4G LTE, dual-band (2.4GHz and 5GHz) Wi-Fi 802.11c, Bluetooth v5.0, GPS/ A-GPS, and USB Type-C. Sensors on board include accelerometer, ambient light sensor, digital compass, gyroscope, infrared sensor, and proximity sensor. It measures 152.6x73.95x7.6mm and weighs 163 grams. It is powered by a 3500mAh battery.