There are been many contrasting rumours about the Mi Note 2. Some claim that the smartphone will sport dual edge display and a dual camera setup, while the others claim only one of them will make it to the smartphone. In any case, Xiaomi has scheduled an event on October 25 where all the official details of the Mi Note successor will be out of the bag once and for all. But before that happens, presentation slides claimed to be for the upcoming event have been leaked on Weibo, revealing all specifications and pricing details of the Mi Note 2.

This leak, first spotted by PhoneArena, leaves very little to the imagination. The slides reveal that the Xiaomi Mi Note 2 will feature a 5.7-inch Super Amoled (1440x2560 pixels) display with Force Touch technology. For those unaware, Force Touch (or rather, 3D Touch) was first introduced by Apple on the iPhone 6s, and is a pressure sensitive display technology that Apple uses to provide additional interface options to users. The smartphone is listed as powered by a 64-bit Snapdragon 821 quad-core processor paired with Adreno 530GPU. The smartphone is expected to come in two bundles - 4GB of RAM/ 64GB of storage, and 6GB of RAM/ 128GB of storage.

It packs a huge 4100mAh battery and is backed by the Quick Charge fast charging technology. The Mi Note 2 will support Mi Pay i.e will be NFC-enabled. There's an ultrasonic fingerprint scanner integrated under the display, though we wonder if it's instead under glass but not under the display panel itself, as seen in the Mi 5s. According to the slides, an iris scanner has also been introduced at the front. Apart from NFC, other connectivity options include 4G VoLTE , Bluetooth 4.1, WiFi 802.11 ac (2.4/5 GHz) MU-MIMO, GPS, and USB Type-C port. The Mi Note 2 runs on Android 6.0 Marshmallow-based MIUI 8, and supports dual-SIM slots (Nano + Nano). 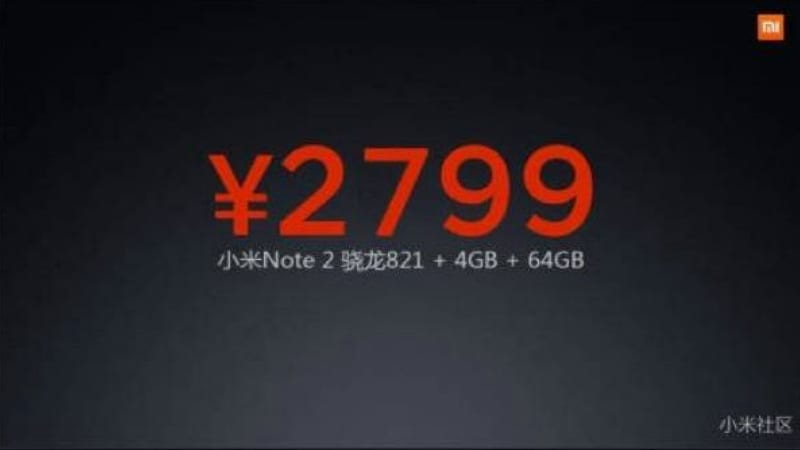