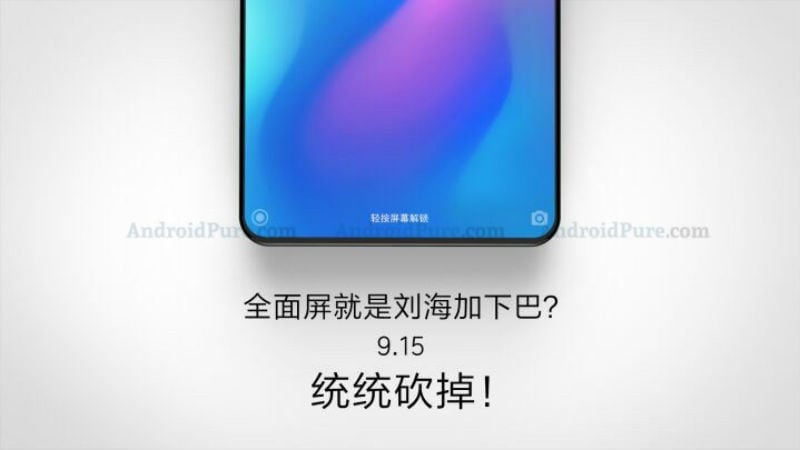 Mi Mix 3, Xiaomi's upcoming smartphone, will reportedly launch on September 15. According to a new report that has hinted at the launch date of the Mi Mix 3, the handset will come with a no-notch and no-bezel design. The Mi Mix series from Xiaomi is known for being one of the pioneers of all-screen front panels in smartphones, and as per latest information, the handset will push the bezels further back. A number of leaks surrounding the Xiaomi Mi Mix 3 have been surfacing on the internet for a while now. A leaked teaser had previously already suggested that the smartphone will launch in September this year.

Following in the footsteps of Oppo and Vivo, Xiaomi is rumoured to be designing the Mi Mix 3 with a pop-up camera. Folks at AndroidPure have leaked an image of what appears to be a promotional poster for the Mi Mix 3. It shows only the bottom of the handset, but that itself hints at the fact that the smartphone will not come with a chin. In comparison, both the Xiaomi Mi Mix and Mi Mix 2 came with a prominent chin, thanks to the camera placement at the bottom.

The other suggestion made by the leak, as mentioned, is the launch date of the Xiaomi Mi Mix 3. The launch date is listed as September 15. Interestingly, Apple is also expected to launch the 2018 models of its iPhone around that time.

Previously, hints of the Mi Mix 3 design were found in the MIUI 10 software released to other phone users. The smartphone was seen sporting nearly bezel-less screen, with a slight thickness at the bottom of the display. Furthermore, the top of the display is said to be completely bezel-free, without any notch as well. The company is therefore tipped to include the motorised pop-up camera like the Vivo Nex and the Oppo Find X.