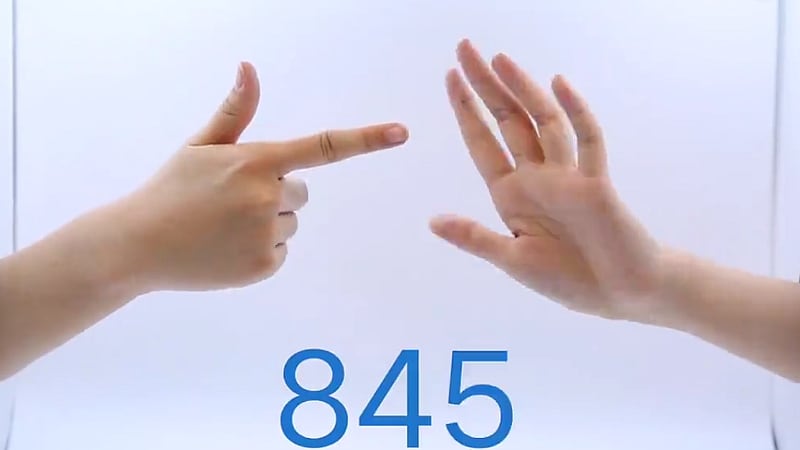 Xiaomi Mi MIX 2s launch is set for March 27, and Chinese company has released a new teaser about the flagship smartphone. We already knew the smartphone would be powered by Qualcomm's new top-of-the-line mobile processor, the Snapdragon 845 SoC, recently seen unveiled in the Samsung Galaxy S9 and Galaxy S9+, apart from the Sony Xperia XZ2 and Xperia XZ2 Compact. The company's teaser doesn't reveal anything knew, but just reconfirm the use of the Snapdragon 845 SoC - one of the smartphone's biggest highlight.

The Xiaomi Mi MIX 2s teaser, posted on Chinese video sharing website MiaoPai.com, spells out the 8, 4, and 5 of the Snapdragon 845 SoC in sign language. Not much else has been teased by the company yet, beyond the AnTuTu score (273741) - back when it had announced the March 27 launch. We can of course expect the smartphone to take forward the bezel-less design of the original, pioneering Mi MIX, launched back in October, 2016 as a concept phone. Its successor - the Mi MIX 2 - was launched as a commercial device in September last year.

The first leak of the Mi MIX 2s had indicated it would be feature an iPhone X-like notch on top of the display, for the same purpose as the Apple smartphone - to fit the host of front facing sensors modern smartphones employ, including the front camera and proximity sensor. The reported move to follow Apple's design decision would be controversial, not in the least because Xiaomi poked fun at the Cupertino giant at the launch of the Mi MIX 2.

More recent leaks claim the Xiaomi Mi MIX 2s would sport an under-display fingerprint sensor, and moves the 'notch' to the right side - a design different from the iPhone X, which has it in the centre. It was also tipped to sport a 5.99-inch display, up to 8GB of RAM, 12-megapixel dual camera, 256GB of built-in storage, and support for global 4G LTE bands. It is said to bear a 4400mAh battery - though another leak claims it bears a 3400mAh battery, and adds that AI features will be brought to the camera. The latest Mi MIX 2s leak also tips the use of a Samsung-built OLED display

MWC 2018: The Highs, the Lows, and the Many New Faces of Android