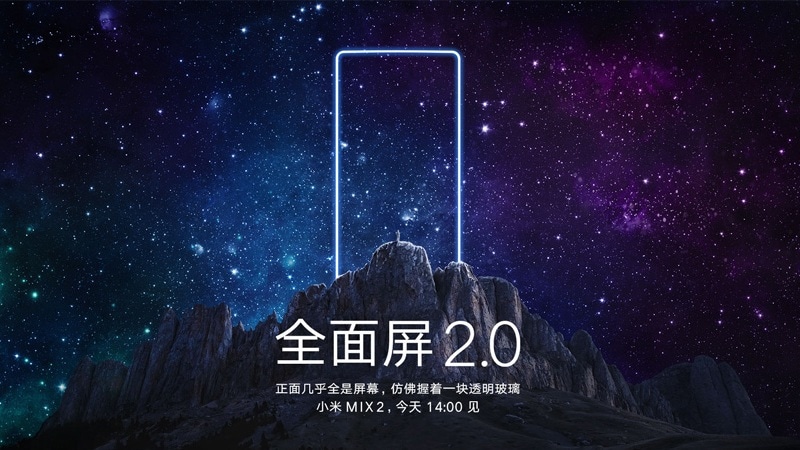 Xiaomi Mi MIX 2 and Mi Note 3 smartphones are set to launch on Monday at an event in China. The Mi MIX 2 launch time is 2pm CST (11:30am IST), and will be live streamed on the official Xiaomi website in China, as well as YouTube (embedded below). Not a lot of information is available about the upcoming handsets so far, but a few recent leaks do shed some light on their specifications. Mi MIX 2 will be designed in partnership with renowned designed Philippe Stack, who also played a similar role for the launch of the original Mi MIX - unveiled as a concept smartphone at the time. You can watch the Mi MIX 2 launch live stream below, and stay tuned to Gadgets 360 for more details as they happen.

The Xiaomi Mi MIX 2 is the successor of the Mi MIX, a smartphone best known for its bezel-less display. The company will continue that trend with the Xiaomi Mi MIX 2. The most recent official information surrounding the smartphone's launch was confirmed by Xiaomi's President Lin Bin with a teaser confirming a facial recognition feature used to unlock the phone.

Apart from the fact that Xiaomi will launch the Mi Mix 2 a day before Apple launches its tenth anniversary iPhone (which is also expected to sport a bezel-less display), it was tipped earlier this week that the phone could be powered by a yet-to-be-announced Snapdragon 836 processor, though that seems unlikely now. It is also tipped to run the latest Android 8.0 Oreo out-of-the-box.

Separately, a more recent leak on Weibo with a live photo of the Xiaomi Mi MIX 2 smartphone indicates that the company has managed to reduce the bottom bezel of the Mi MIX 2 even further than what we saw on the original Mi MIX. The front camera, as before, is on the bottom bezel, while the volume key and power button is seen on the right side of the smartphone.

Lin Bin also posted teasers of what could be the Mi Note 3 on his Weibo account. The caption reads a "large version of the Mi 6" which points to the Mi Note 3. This wouldn't be surprising considering that the company launched unveiled the Xiaomi Mi Note 2 alongside the Mi MIX last year.

As of now, details regarding the Mi Note 3 are limited. The teaser, however, does point to a dual rear camera setup on the back, something which was rumoured back in May as well, and a glossy metallic finish with Blue as a colour option. Like the Mi Note 2, one can expect the Mi Note 3 to sport a dual curved edge display. It was also rumoured last month that the Mi Note 3 could sport a 2K OLED screen made by Samsung. A more recent leak, via a tipster on Twitter, indicates the smartphone will be powered by a Qualcomm Snapdragon 660 SoC, up to 6GB of RAM, 128GB of inbuilt storage, and a USB Type-C port. No 3.5mm audio jack will be present.