Mi CC9 is seen to sport a triple rear camera setup and a white gradient back panel.

Xiaomi Mi CC9 and Mi CC9e are all set to launch on July 2, and ahead of the phones' official unveiling, the Chinese smartphone maker and its executives have shared new teasers that give us a better look at the rear panel of the Mi CC9 as well as its retail box. The Xiaomi Mi CC9 was recently confirmed to sport a 48-megapixel rear camera sensor and a 32-megapixel selfie shooter. In the new teasers, the phone is seen to sport a triple rear camera setup.

Xiaomi and its CEO Lei Jun have shared multiple photos of the Mi CC9 on Weibo showing off its rear panel. The phone is seen to sport a gradient glossy back panel with a triple rear camera setup aligned vertically on the top left corner. There is no rear fingerprint sensor which means that the phone may sport an in-display fingerprint sensor, something that has been leaked earlier as well. The edges are tapered for better grip and the bottom edge is seen to sport two speaker grilles and a USB Type-C port.

A separate post by Xiaomi CC product manager Lao Wei on Weibo has revealed the retail box of the Mi CC9. The box is seen to sport a minimal white design, with the colourful ‘CC' logo taking most part of the front. 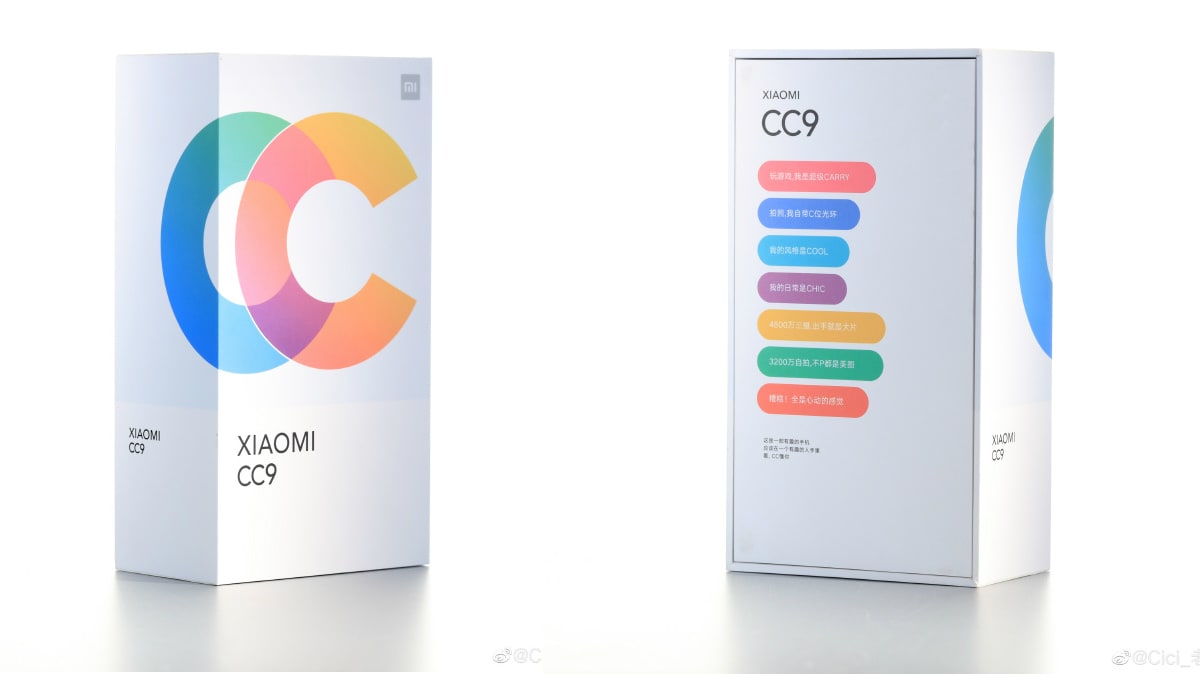 The Mi CC9 and Mi CC9e are the first to debut in the company's new ‘CC' smartphone series meant for the youth. The Mi CC9 is tipped to sport an all-screen display with no notch up front.

The Xiaomi Mi CC9 and Mi CC9e are rumoured to be made available in multiple variants, and the recent price leak suggests that the series will be priced starting at CNY 1,599 (roughly Rs. 16,100). Rumoured specifications of the Mi CC9 include 6.39-inch full-HD+ display, Snapdragon 730 SoC 4,000mAh battery, 48-megapixel Sony IMX586 sensor, and 32-megapixel selfie sensor.

Further reading: Xiaomi, Mi CC9, Mi CC9 Specifications, Mi CC9 Retail Box, Mi CC9 Renders
Tasneem Akolawala Email Tasneem
Tasneem Akolawala is a Senior Reporter for Gadgets 360. Her reporting expertise encompasses smartphones, wearables, apps, social media, and the overall tech industry. She reports out of Mumbai, and also writes about the ups and downs in the Indian telecom sector. Tasneem can be reached on Twitter at @MuteRiot, and leads, tips, and releases can be sent to tasneema@ndtv.com. More
India Said to Have Warned Amazon, Flipkart, Other Foreign E-Commerce Firms Over Steep Discounts
US Chip Firm Micron Says It Can 'Lawfully' Sell Some Items to Huawei