Xiaomi Mi A2 has upgraded the video recording experience ahead of its first sale in India.

Xiaomi Mi A2 has received a software update that brings the August Android security patch as well as upgrades the rear camera with the ability to record full-HD (1080p) videos at 60fps frame rate. The latest update notably comes just ahead of the availability of the Mi A2 in India. The smartphone that was launched in the country last week with a starting price of Rs. 16,999 will go on sale for the first time on Thursday. Prior to the update, the Mi A2 was supporting full-HD video recording at 30fps. The handset also includes electronic image stabilisation (EIS) to reduce blurs and compensate for device shake during video recording.

The first noticeable change that the latest software update brings to the Xiaomi Mi A2 is the arrival of the August Android security patch. The security patch level that the update includes is the August 5 one that originally arrived on the Pixel handsets earlier this month. Further, the security patch is likely to address various behind-the-scene vulnerabilities and security loopholes.

In addition to the August Android security patch, the Mi A2 update brings support for 60fps frame rate while recording videos on full-HD (1080p) resolution. This means you can now capture more frames in a full-HD video being recorded through the Mi A2. As we mentioned, the handset was previously offering only the 30fps frame rate option for recording full-HD videos. The Mi A2 importantly sports a dual rear camera setup that includes a 12-megapixel Sony IMX486 sensor along with an f/1.75 aperture and a 20-megapixel IMX376 sensor along with a 4-in-1 Super Pixel tech and an f/1.75 aperture. 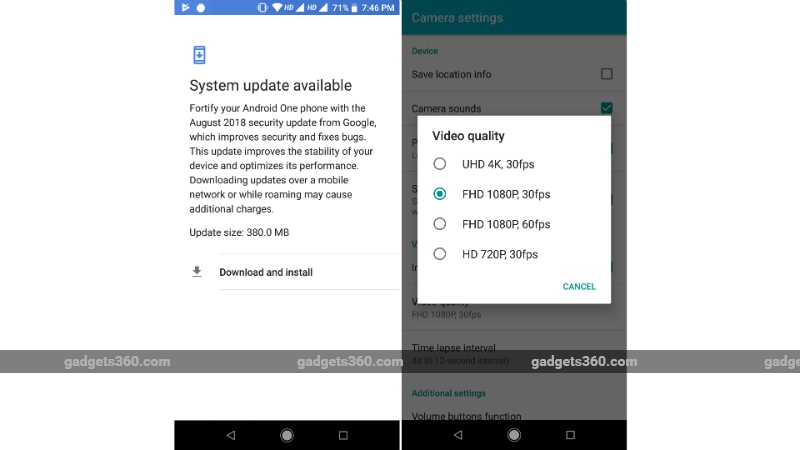 While Xiaomi is rolling out the update to all Mi A2 units in phases, you can manually check its availability on your device. You just need to go to Settings > System updates > Check for Updates to check for the new update.

It is worth pointing out that the latest update for the Mi A2 comes just ahead of its formal arrival in India. The handset was launched last week and is set to go on sale through Amazon, Mi.com, Mi Home, and Mi Preferred Partner Store starting 12 noon on Thursday. It comes with a starting price of Rs. 16,999 for the 4GB RAM and 64GB storage configuration and is available in Black, Gold, Lake Blue, and Rose Gold colour options.