Mi A2 Lite price will be less than previously speculated, the AliExpress listing suggests

Xiaomi Mi A2 Lite has gone up for sale via a third-party e-commerce listing ahead of its official launch. Notably, the new development comes ahead of the formal launch of the Mi A2 that will be launched alongside its lighter and cheaper version and will debut in Spain on July 24. The Mi A2 Lite is on sale on China's AliExpress in two variants - one with 3GB RAM and 32GB storage at $189.99 (approximately Rs. 13,000) and the other one with 4GB RAM and 64GB storage at $209.99 (roughly Rs. 14,400). The same model was spotted in Poland last week with a price of PLN 999 (roughly Rs. 18,600). This suggests that the official price of the Mi A2 Lite could be cheaper than speculated.

Alongside highlighting the price, the AliExpress listing details the key specifications of the Xiaomi Mi A2 Lite that had initially received certifications in China and Singapore with model number M1805D1. The third-party e-commerce listing shows it to run dual-SIM (Nano) Mi A2 Lite runs Android 8.1 Oreo - based on Google's Android One programme - and features a 5.84-inch full-HD+ (1080x2280 pixels) display with a 19:9 aspect ratio. It is seen to be powered by a Qualcomm Snapdragon 625 SoC, paired with up to 4GB of RAM and up to 64GB of onboard storage that is expandable via microSD card (up to 256GB). On the imaging front, a vertically-placed dual rear camera setup with a 12-megapixel primary sensor and a 5-megapixel secondary sensor - powered by artificial intelligence based AI Portrait mode and AI Beauty feature are listed. The handset is listed to sport a 5-megapixel sensor on the front with a Smart Beauty feature. 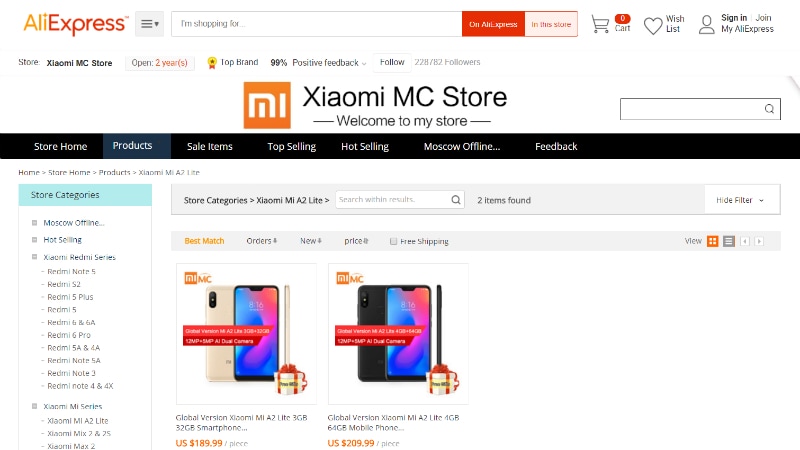 The specification list that has surfaced on AliExpress matches previous reports. Also, the Mi A2 Lite is seen to come in Gold, Black, and Blue colour options. The online listing additionally showcases the design of the new Xiaomi handset that has a notch design - similar to the Redmi 6 Pro and Mi 8 flagship. Likewise, there is a fingerprint sensor at the back.

While the listing on AliExpress has confirmed much about the Mi A2 Lite, we are yet to such revelation of the Mi A2 that will be the successor to last year's Mi A1. Having said that, both handsets are expected to debut on July 24 at Xiaomi's global launch event in Spain.