Mi A2 appears to be the latest smartphone to receive the much-awaited Android 9.0 Pie stable update. Part of Google's Android One programme, the Xiaomi smartphone is guaranteed to get major Android updates till two years after launch, apart from sporting a Google-optimised stock Android interface. Now, a number of users are reporting that their Mi A2 handsets are getting the latest Android version, bringing many new features, including adaptive battery, gesture navigation, and app actions. We were also able to spot the update on our Mi A2. Notably, the latest Android build is reportedly being rolled out over-the-air (OTA) to Mi A2 users only in India as of now. Unfortunately, no announcement about a similar update for the Mi A1 - the first Android One smartphone from Xiaomi - has been made in the recent past.

The Android 9.0 Pie update to Xiaomi Mi A2 comes just a few days after the Pie beta release for the smartphone was spotted. Meanwhile, screenshots of the stable Android 9.0 Pie update have been posted by some Mi A2 users on Xiaomi's Mi Forum. According to the changelog seen in the image, the Xiaomi Mi A2's Android Pie update brings new features such as "adaptive battery and brightness", "simpler ways to navigate your phone", and "recommended apps and actions based on your context". Notably, the update size is 1067.7MB. Separately, the Xiaomi Redmi 5A started receiving its MIUI 10 Global Stable ROM this week as well. 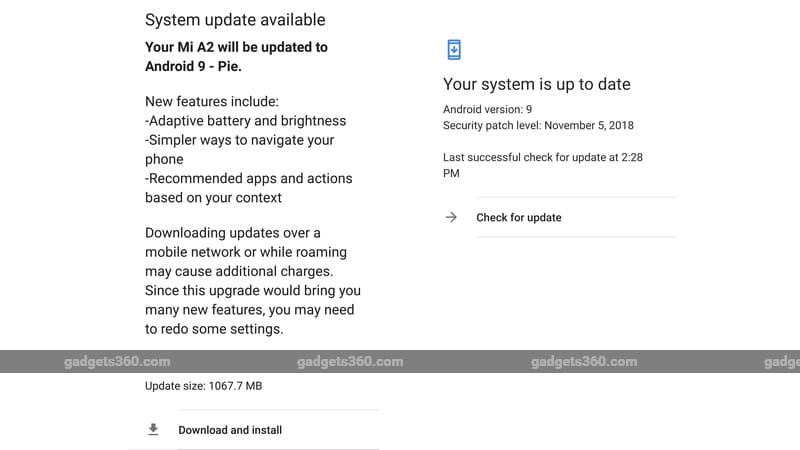 How to install Android Pie on Mi A2

While Xiaomi is rolling out the update to all Mi A2 units in phases, you can manually check its availability on your smartphone. You just need to go to Settings > System updates > Check for Updates to check for the new update.