Xiaomi Mi A1 has now started receiving Android 9.0 Pie, in its beta stable form. The new update comes a long time after the Mi A1 received Android 8.1 Oreo. The handset was notably launched with Android 7.1.2 Nougat back in September last year. It comes under Google's Android One programme that is aimed to offer speedier software updates and stock Android experience. Xiaomi also earlier this year launched the Mi A2 as the successor to the Mi A1. The new model received an update to Android 9.0 Pie last month.

As per a changelog posted on the official MIUI forums by a user, the Android 9.0 Pie update for the Xiaomi Mi A1 also brings FM radio support. This is a noteworthy addition as the smartphone didn't have FM radio support previously. The changelog also specifies that the latest software update brings a bunch of core Android Pie features, including Adaptive Battery and Brightness as well as the gesture-based navigation system that is touted to offer "simpler ways to navigate". Moreover, the update is said to bring support for dual 4G VoLTE. Notably, this is a beta stable update, Xiaomi's term for a soak test that rolls out the update to a few users to iron out bugs before a general release. This information comes from a MIUI Forum post by a moderator, who reveals the build number to be PKQ1.180917.001 (V10.0.2.0.PDHMIFK).

The update is also reported to have some bugs. The user who has reported its existence on the MIUI forums said that the capacitive buttons on the smartphone aren't turned off when the gesture navigation is enabled. It is also said that the multitouch bug that emerged from the Android Oreo update still exists. Battery usage history is also said to be unreliable. 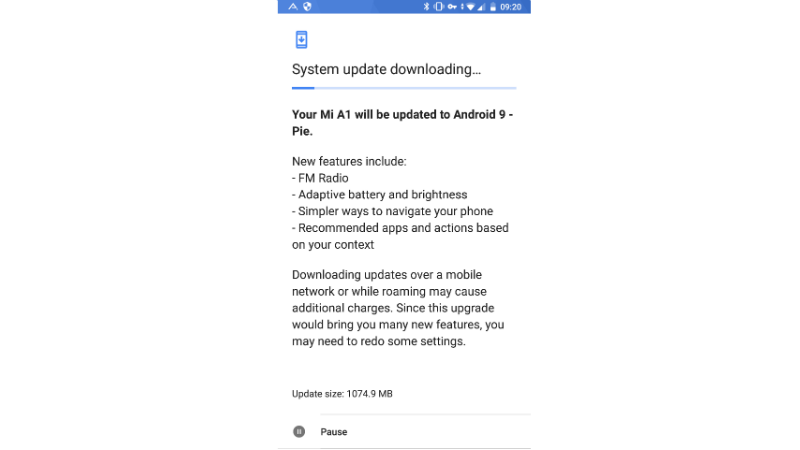 The Android Pie update for the Xiaomi Mi A1 is apparently over 1.7GB in size. A separate report from tech blog Androguider reveals that the update is rolling out in Bangladesh. However, you can manually check its availability on your Mi A1 by going to Settings > Software updates > Check for Updates.

As we mentioned, the latest software build comes several months after the Mi A1 received an update to Android 8.1 Oreo. That update also brought the July 2018 security patch. Xiaomi also last month released the Android Pie update for the Mi A2.

The dual-SIM Xiaomi Mi A1 was launched back in September last year with Android 7.1.2 Nougat. It features a 5.5-inch full-HD+ full-HD (1080x1920 pixels) display with a Corning Gorilla Glass protection. Under the hood, there is a Qualcomm Snapdragon 625 SoC, coupled with 4GB of RAM and 64GB of onboard storage. The smartphone has a dual rear camera setup that includes two 12-megapixel sensors. For selfies, there is a 5-megapixel sensor at the front. The smartphone also packs a 3,080mAh battery.