Xiaomi Mi A1 Android One Phone Launched in India: Price, Specifications, and Everything Else You Need to Know

Xiaomi has unveiled its first Android One phone, the Xiaomi Mi A1, at an event in New Delhi. Quite similar in terms of specifications to the Mi 5X, the new Xiaomi Mi A1 also has dual rear cameras, the new trend for affordable smartphones in the Indian market. Despite being part of the Android One initiative, the smartphone retains some Xiaomi apps such as the Mi Camera, Mi Remote, and Mi Store apps, apart from a Mi Services section within Settings.

As an Android One phone, the Xiaomi Mi A1 comes with stock Android 7.1.2 baked in and will get timely Android Oreo update; with the guarantee of Android P when the software version launches next year. Other Google services optimised for Xiaomi Mi A1 are Assistant and Photos, while Google Play Protect will keep it secure. Google Photos also gives users unlimited high-quality photo storage.

Other key Mi A1 features include a metal unibody design, 2.5D curved glass, and features a fingerprint sensor on the rear panel. The smartphone, in the Indian market, sports a dual pyrolytic graphite sheet, which helps radiate heat, helping reduce thermal performance by up to 2-degrees Celsius. It also sports an IR blaster.

Xiaomi Mi A1 price and specifications

The Xiaomi Mi A1 price in India is Rs. 14,999, and it will be available via Flipkart, Mi.com, and the company's Mi Home stores from 12 pm IST on September 12. The smartphone will also be available via offline retail chains (including Sangeetha, Poorvika, Big C, LOT, UniverCell, E-Zone, Croma, and Vijay Sales) as well as Mi Preferred Partner stores, on the same day. Mi A1 launch offers include up to 300GB of additional 4G data from Airtel. Notably, Google in a separate statement revealed that the Xiaomi Mi A1 will be available in dozens of countries apart from India, including Indonesia, Russia, Taiwan, and Vietnam (full list at the bottom).

Xiaomi has revealed to us that the Mi A1 will be manufactured in India at some point, sporting the 'Made in India' tag; however, at launch, units will be shipped in from different countries. It will be available in Black, Rose Gold, and Gold colour options.

The Xiaomi Mi A1 is a dual-SIM (Nano-SIM) smartphone that runs Android 7.1.2 Nougat. It features a 5.5-inch full-HD (1080x1920 pixels) display with Corning Gorilla Glass. It is powered by an octa-core Qualcomm Snapdragon 625 SoC coupled with 4GB of RAM. Coming to the dual rear camera setup, the Xiaomi Mi A1 bears two 12-megapixel sensors, with one featuring a wide-angle lens with a 1.25-micron pixel sensor and f/2.2 aperture, and the other sporting a telephoto lens, 1-micron pixel sensor, an f/2.6 aperture, and capable of delivering 2x optical zoom. As can be expected with the setup, Xiaomi says the smartphone comes with a Portrait Mode for delivering depth of field effects like Bokeh. The smartphone bears a 5-megapixel front camera with a real-time beautification mode.

The smartphone bears 64GB of inbuilt storage that is expandable via microSD card (up to 128GB) in a hybrid dual-SIM configuration. The Xiaomi Mi A1 offers 4G VoLTE, dual-band Wi-Fi 802.11ac, GPS/ A-GPS, USB Type-C port, and 3.5mm headphone jack as connectivity options. Sensors on board the Xiaomi M A1 include an accelerometer, ambient light sensor, gyroscope, infrared, magnetometer, and proximity sensor. The smartphone bears a 3080mAh battery, measures 155.4x75.8x7.3mm, and weighs 168 grams. The company is touting several audio enhancements, such as the inclusion of a 10V smart power amplifier, DHS Audio Calibration Algorithm, and support for high impedance headphones. 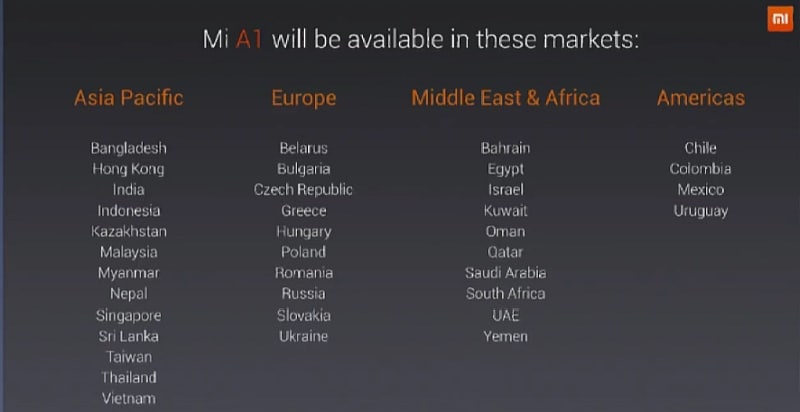 As we mentioned, the biggest highlight of the Xiaomi Mi A1 is that it is part of the Android One initiative. In a separate press statement, Google revealed exactly what this means for the Xiaomi smartphone. The Xiaomi Mi A1 will offer a "pure Android experience with a clean design and a small, carefully curated set of preinstalled apps." It will be optimised for Google Assistant while Google Photos will be the default gallery for the smartphone.

Mi A1 will also be secure, with "regular security updates" and built-in malware protection from Google Play Protect. Finally, the smartphone will also receive timely upgrades, with Google promising an Android Oreo update for the smartphone before the end of the year, and adding that the Mi A1 will be the amongst the first to receive an upgrade to Android P next year.

Mi A1 vs Moto G5S Plus vs Nokia 6 vs Lenovo K8 Note: Price, Specifications, Features Compared

Google in its statement added, "When we launched Android One in India back in 2014, the goal was to get the next billion people online by providing them with high quality, affordable phones. Since then, the larger community has told us they value what Android One stands for across a range of phones - a refreshingly simple software experience that is accessible, always fresh and stays ahead of the curve, with improvements to battery life, usability, and of course, security... As phone manufacturers continue to innovate by delivering high-quality devices at accessible price points, keeping the inside of one's phone innovative, fresh and secure is critical to a great experience. We're extending our commitment to Android One by working with more partners to build phones that run a software experience designed by Google."

Xiaomi Mi A1 Android One Phone Launched in India: Price, Specifications, and Everything Else You Need to Know
Comment