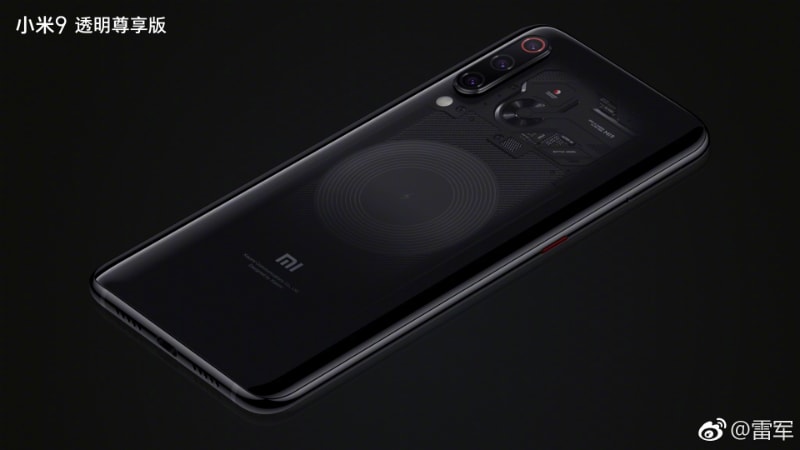 Xiaomi Mi 9 launch is just a day away and CEO Lei Jun has now shared images of the smartphone with its fake transparent back that gives the illusion of what the internals look like. The Xiaomi Mi 8 was also launched in a transparent back variant, and Xiaomi back then called it the Xiaomi Mi 8 Explorer Edition. The Xiaomi Mi 9 Explorer Edition has also been leaked in the past, and the renders suggest that it will sport a quad camera setup, and not a triple camera setup seen in the fresh photos shared by Jun. This suggests that the photos shared by Jun may be of a Transparent Edition of the Mi 9 and not of the Mi 9 Explorer Edition.

Jun has shared photos of the Mi 9 Transparent Edition on Weibo detailing how the back panel was made. The company used a different approach than the Mi 8 Explorer Edition where it made the illusion of the circuit board being seen outside of a transparent case, but it really was a fake 3D drawing of the circuit board on top of the back panel. With the Mi 9, Xiaomi has etched a design on a 0.3mm aluminium sheet, and has carved it using a CNC machine and a tiny cutter for getting all the minute details right and creating a 3D effect. Jun notes that the aluminium sheet also helps in heat dissipation.

Jun also mentions that the Mi 9 Transparent Edition will sport 12GB RAM, and come with a 7-piece lens with a 48-megapixel main camera with f/1.47 aperture. In his entire post, Jun never calls this variant the Mi 9 Explorer Edition, suggesting that this may just be a transparent back panel option to the vanilla Mi 9. The Mi 9 Explorer Edition may be a separate device with a rear quad-camera setup, and a similar back panel, as reported earlier.

To recall, an official video for a Transparent Edition of the Mi 9 has also showed up earlier, showing a transparent back panel, a triple rear camera setup, as well as its Alita Battle Angel branding.

In any case, the Xiaomi Mi 9 Explorer Edition has been leaked earlier with a quad-camera setup tipped on multiple occasions. The Explorer Edition is tipped to be priced at CNY 5,999 which is roughly Rs. 63,500. All the confusion behind the different variants will be put to rest at Xiaomi's launch event set for tomorrow.