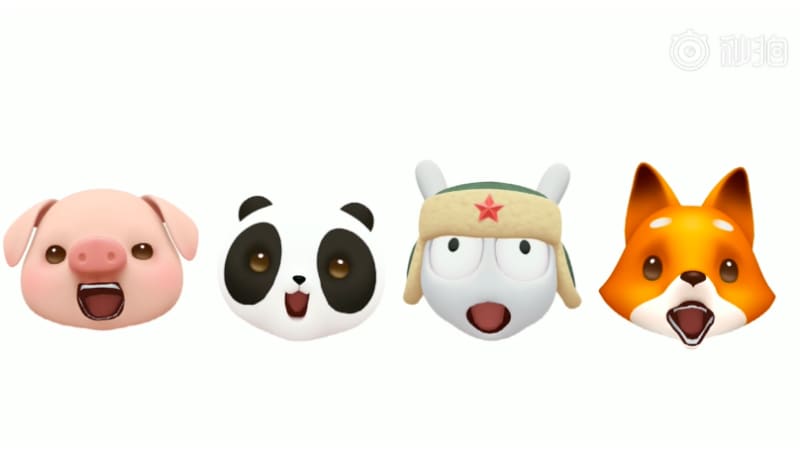 Mi 8 is all set to be Chinese phone maker Xiaomi's next flagship with an official unveiling at the annual product launch it has scheduled for May 31 in China. With just a couple of days to go before the event, newer leaks have now emerged that give us a closer look at the features of the Mi 8. The smartphone is expected to arrive with 3D AR emojis similar to Animoji on the iPhone X. Apart from that, leaked promotional images give us a better look at the design and back panel of the Mi 8. Lastly, a mysterious Mi 8 SE smartphone has been allegedly spotted on the official Xiaomi website.

Taking on Apple's Animoji, Xiaomi has released an official teaser on its Weibo account that reveals a similar kind of emoji that will be available on the upcoming Xiaomi Mi 8. The video shows characters like a pig, a fox, a panda, and Xiaomi's official mascot singing the company's flagship tune. It ends with a countdown to the official event that will be held in China on May 31.

Separately, alleged promo shots of the Mi 8 have been posted on SlashLeaks that appear to have been first seen on a Xiaomi-centric Telegram group. The images show a wide notch on the front with an bezel-less design and a significant bottom chin. On the back, a vertically stacked dual camera setup and a fingerprint sensor can be seen. This puts to doubt rumours of an in-display fingerprint sensor on the Xiaomi Mi 8. The poster also reveals features like GPS, AI dual camera, Snapdragon 845 SoC, and more.

Next, this seems to be the first instance wherein the mention of a Xiaomi Mi 8 SE has been spotted on an official listing. As first spotted by Sohu, Xiaomi Mi 8 SE has been mentioned in the description column of a CNY 50 (roughly Rs. 500) coupon on Xiaomi's shopping portal in China. Apart from that, there is no information around the specifications and features of the smartphone.

Add to that, tipster Ishan Agarwal has apparently obtained source code that also carries the mention of the Mi 8 SE, which according to him will be a premium variant of the flagship series. In a separate tweet, he states that the regular Mi 8 will arrive in a 4GB/ 6GB RAM and 64GB inbuilt storage options, and in Grey, Blue, Gold, and Red colour variants. On the other hand, the premium Mi 8 SE is expected to get 6GB of RAM and 64GB/ 128GB/ 256GB internal storage. The Mi 8 SE will reportedly be made available in Blue, Gold, Blue, and White colour options.

Apart from the flagship Mi 8, Xiaomi is expected to update its wearable segment with the new Mi Band 3. The launch comes almost two years after the Mi Band 2 was unveiled back in September of 2016. MIUI 10, a major update to Xiaomi's mobile OS, will also be launched at the annual product event.