Xiaomi Mi 8 Lite that was launched as the Mi 8 Youth Edition in China is set to receive a new variant with 4GB of RAM and 128GB of onboard storage. The new variant will debut on November 16 and will sit alongside the existing 6GB RAM variants that have 64GB and 128GB storage options and the 4GB RAM variant that comes with a 64GB storage option. It will initially be exclusive to the Chinese market. However, it is safe to expect its rollout in other markets since Xiaomi already teased the global launch of the Mi 8 Lite. 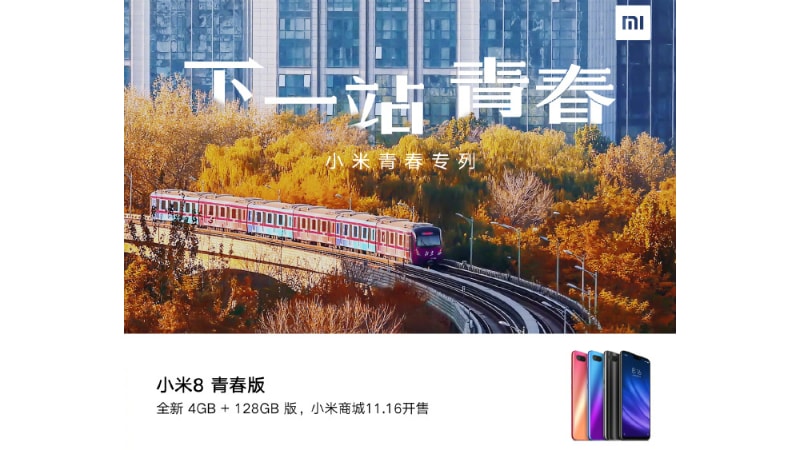 The dual-SIM Xiaomi Mi 8 Youth Edition runs MIUI on top of the Android operating system and features a 6.26-inch full-HD+ (1080x2280 pixels) LCD panel with a notch on top and a 19:9 aspect ratio. The smartphone is powered by an octa-core Qualcomm Snapdragon 660 AIE SoC, paired with up to 6GB RAM and 128GB of onboard storage. For images and videos, it has a dual rear camera setup that includes a 12-megapixel primary sensor and a 5-megapixel secondary sensor along with an f/1.9 aperture and AI capabilities. There is also a 24-megapixel Sony IMX576 selfie camera at the front. The frontal sensor also supports a Face Unlock feature.

The Mi 8 Lite has 64GB and 128GB of internal storage options. The smartphone has a rear-facing fingerprint sensor. Besides, it packs a 3,350mAh battery that supports Qualcomm Quick Charge 3.0.