Xiaomi's next flagship smartphone launch is seemingly round the corner. The company looks to have adopted a different strategy this time around, however, with two handsets that are expected to sport the latest Qualcomm Snapdragon 845 SoC. One of them, confirmed to launch on March 27, is the Mi MIX 2S. Yet another phone has been spotted on Geekbench that points towards the impending launch of the Mi 7, successor to last year's Xiaomi Mi 6.

A new Geekbench listing, spotted by SlashLeaks, suggests that Xiaomi is all set to unveil a new smartphone codenamed "Xiaomi Dipper". The listing also reveals certain specifications including the presence of an octa-core Qualcomm Snapdragon 845 SoC, 6GB RAM, and Android 8.0.0 Oreo. With these premium specifications, we can safely assume this phone to be the Xiaomi Mi 7, or whatever the Chinese phone maker wants to call its next flagship. Incidentally, Xiaomi has previously used constellation codenames such as Capricorn, Gemini, and Natrium for flagship handsets like the Mi 5S Plus, Mi 5S, and Mi 5, which could mean that it is teasing the launch of Mi 7 by hinting at the Big Dipper constellation. 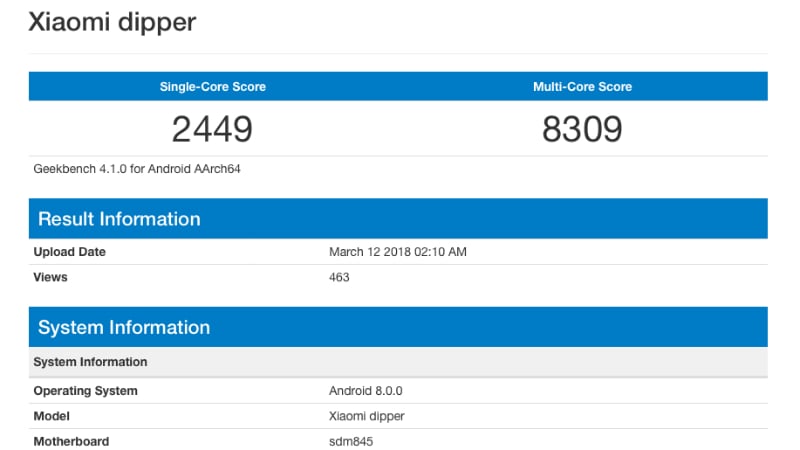 The phone is seen to have a single-core score of 2449 and a multi-core score of 8309. Thus, purely by Geekbench scores, it falls below the likes of iPhone X, iPhone 8, Galaxy S9, and even the Sony Xperia XZ2. This kind of performance is expected considering it will most likely be placed in the affordable flagship price segment.