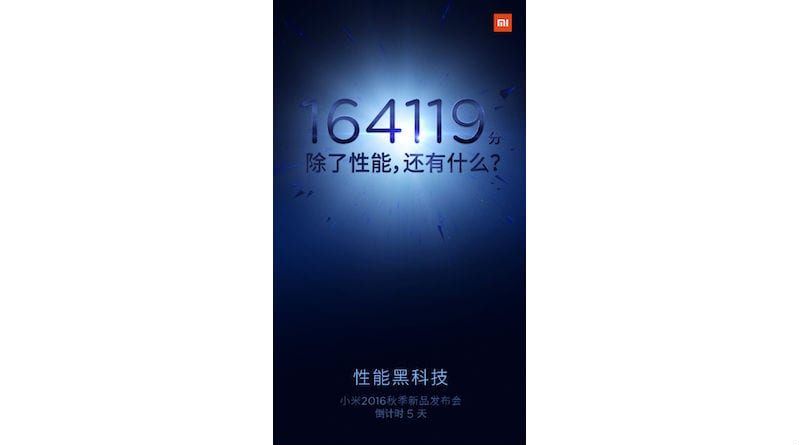 Xiaomi has been subtly teasing the launch of its upcoming Mi 5s. The Chinese smartphone maker on Monday released a teaser with a big 'S', hinting that the company is ready to unveil the Mi 5s on September 27. The phone has now been subjected to AnTuTu's benchmark test, scoring a mighty impressive 164,119. Xiaomi is of course proud of the score, using it as a new teaser for the smartphone.

The teaser was posted soon after a leaked AnTuTu benchmark score of 164,002 for the Xiaomi Mi 5s hit the Web. Interestingly, the official Mi 5s AnTuTu score was released by Xiaomi soon after LeEco launched the Le Pro 3 on Wednesday. LeEco revealed the Le Pro 3's AnTuTu score to be 163,544, which puts Xiaomi's Mi 5s ahead. It remains to be seen, however, if Xiaomi will price the Mi 5s competitively seeing as how the Le Pro 3 comes with mighty specifications at a mid-range price starting CNY 1,799 (roughly Rs. 18,100).

Taking all the past leaks into consideration, the Mi 5s is expected expected to sport a 5.5-inch full-HD (1080x1920 pixels). The Mi 5s is also expected to be powered by a 64-bit Snapdragon 821 quad-core processor with Adreno 530 GPU paired with 6GB of RAM. The storage option is expected to be at 256GB and the device is pegged to run on Android 6.0 Marshmallow with MIUI 8 on top.

On the camera front, the Mi 5s is tipped to sport a 16-megapixel rear camera and a 4-megapixel front camera. The Xiaomi Mi 5s may support a fingerprint scanner, and is expected to sport an iPhone 7-like tactile home button.

A fresh rumour doing the rounds of the Internet suggests that Xiaomi could also be unveiling a smaller 4-inch variant of the Mi 5s. An alleged image of the smaller variant was spotted on Weibo. Specifications related to the 4-inch variant are very speculative at the moment. The device is expected to come with a 4.3-inch 720p display with a Snapdragon 820 processor, 3GB of RAM, and 32GB inbuilt storage.

With the 4-inch variant being rumoured, this puts the total list of phones Xiaomi is expected to unveil to four - the remaining devices being the bigger Mi 5s Plus and Mi Note 2. We'll have to wait for September 27 event to see just how many new devices Xiaomi is planning to pull out of the bag.