Share on Facebook Tweet Snapchat Share Reddit Email Comment
As expected, Xiaomi India has launched the 32GB model of the Mi 4i smartphone in India. Priced at Rs. 14,999, the smartphone will go on sale July 28 at 2pm IST. The Xiaomi Mi 4i 32GB model will be available in Dark Grey colour only.

Announcing the news, Xiaomi India said via its social channels, "To kickstart our birthday celebrations, we're introducing our Mi 4i 32GB, now with double the storage capacity and still our most compact innovation ever!" Xiaomi India is celebrating its first anniversary in the country and has announced that will reveal daily surprises for consumers from July 22-28.

The company, as of now, has not revealed whether the Mi 4i 32GB model will be available only via Mi.com or will also be up for grabs via other online and offline retail partners. Currently, only Xiaomi's official site lists the 32GB model of the Mi 4i. 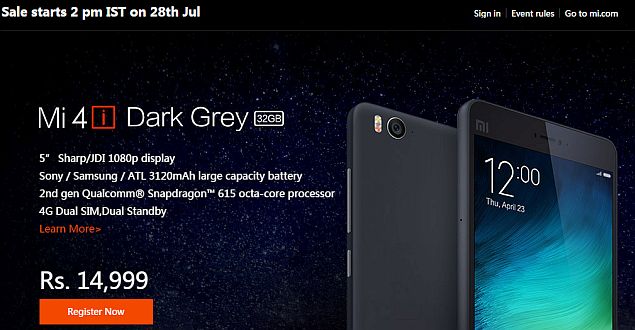 Last month, Xiaomi India revealed a new Dark Grey variant of the Mi 4i smartphone for the Indian market. The smartphone was made available initially via the company's own website, Mi.com/in.

It's worth noting that this was the first instance when Xiaomi India kicked off sales of a new phone via its own website.