As expected, the Xiaomi Mi 4c has been launched in two variants: 2GB of RAM and 16GB storage priced at CNY 1,299 (approximately Rs. 13,500), and 3GB of RAM and 32GB of storage priced at CNY 1499 (approximately Rs. 15,500). The Xiaomi Mi 4c will be going on sale starting Wednesday in China and is expected to arrive in other Asian countries, including India, soon. (Update: A Xiaomi representative has said the smartphone is China only, which will disappoint our readers in India.)

The new Mi 4c supports USB Type-C reversible connector, a highlight of the device. The company has introduced a USB Type-C Adapter which will be available via the company's online store (Mi.com) at CNY 5 (approximately Rs. 50). The smartphone also comes with Edge Tap technology, which Xiaomi claimed it's their patented technology, which allows the handset to perform different assigned functions with a single tap and double tap on the edges of the handset.

According to the company, the Edge Tap technology on the Mi 4c will allow the handset to click an image with just one tap on the edge while double tap will take the user back to previous page. The function can be extremely useful while clicking a quick image without reaching out for the screen. It runs MIUI 6, and is slated to receive MIUI 7 update in the coming months. 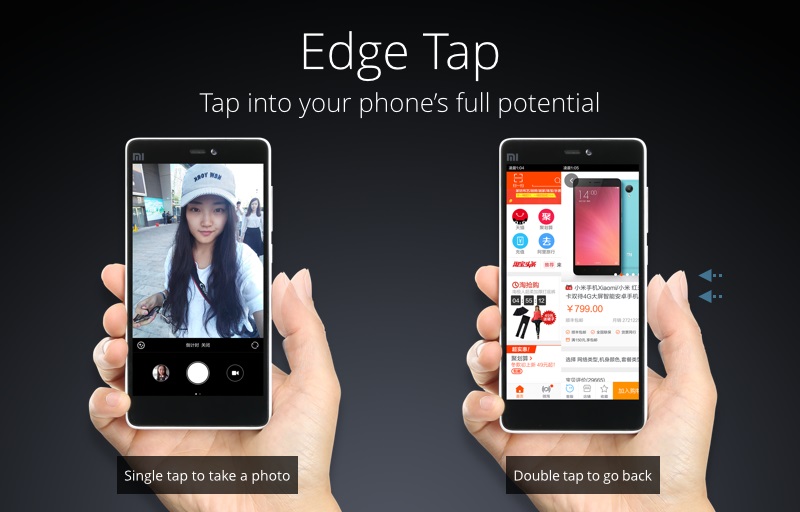 The Xiaomi Mi 4c features a 5-inch full-HD (1080x1920 pixels) display, similar to the Xiaomi Mi 4i. The company touts that the handset features a Sunlight display, which means it can be easy to read on the screen of the Mi 4c under the Sun and also comes with night reading mode. The Mi 4c supports Double Tap feature, which wakes up the screen on double tap.

Under the hood, the Xiaomi Mi 4c is powered by a 64-bit hexa-core Snapdragon 808 processor clocked at 1.8GHz. The handset sports a 13-megapixel rear camera, just like Mi 4i. The rear camera features phase detection autofocus and comes with Sony IMX258 or Samsung S5K3M2 sensor. The handset also features a 5-megapixel front-facing camera that comes with 85-degree wide angle lens and self-timer. The company at the launch compared the front-camera samples of the Mi 4c against the iPhone 6.

The dual 4G SIM-based Mi 4c is backed by 3080mAh battery. The company confirmed that the smartphone supports Quick Charge 2.0. The handset comes with Infrared that helps the handset to act as a remote for various electronic appliances. It measures 138.1x69.6x7.8mm and weighs 132 grams. It will be available in Black, Blue, Orange, Pink, and White colours.