The Xiaomi Mi 4 (16GB) has been priced at CNY 1999 (roughly Rs. 19,400), while the 64GB model is priced at CNY 2499 (roughly Rs. 24,200). The company has set a July release date for the China Unicom version of the handset, followed by versions for other Chinese carriers. Xiaomi said it will launch a 4G-enabled version of the Mi 4 in September that will be available outside China.

At the launch event, Xiaomi's CEO Lei Jun also announced that the company sold 26.11 million phones in H1 2014, which an increase of 271 percent in the same period last year.

Xiaomi, also referred to as 'China's Apple', confirmed the launch on Twitter as well as Facebook with posts that said, "#Mi4 - Introducing our latest product, the Mi 4 - The Fastest Mi Phone Ever."

Introducing the #Mi4 -- The Fastest Mi Phone Ever. http://t.co/HpDi9LydDg pic.twitter.com/LowNYaasA9

For specifications, the Mi 4 is definitely an upgrade from the predecessor Mi 3, as it is powered by a quad-core Qualcomm Snapdragon 801 processor clocked at 2.5GHz alongside 3GB of RAM. The smartphone will come in two storage variants 16 and 64GB (eMMC 5.0).

The Mi 4 sports the same 5-inch full-HD display (1080x1920 pixels) found on the Mi 3; although this time the company has used a JDI OGS full lamination display.

There is a 13-megapixel rear camera and an 8-megapixel front-facing camera on the Xiaomi Mi 4, with both sporting Sony's stacked CMOS sensors. The smartphone is backed by a 3080mAh Li-ion battery.

Xiaomi also notes that the Mi 4 features a stainless steel metal frame which passes through "40 processes and 193 steps". 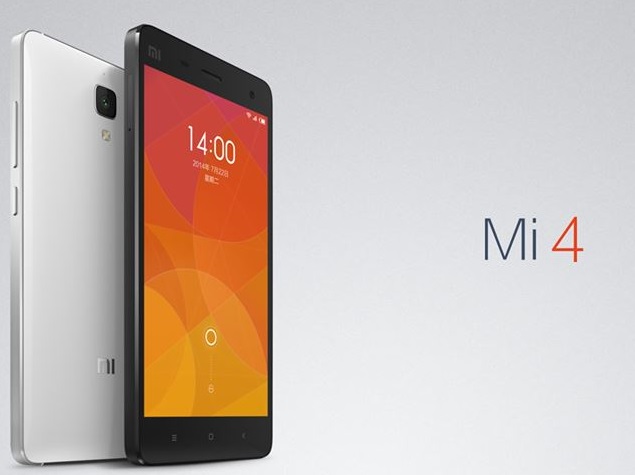 The company also announced its next MIUI version, MIUI 6, will launch on August 16 and is expected to be running on the Mi 4.

The Mi 3 India launch has received a solid response in India, and the company on Monday announced that the smartphone already received 100,000 registrations ahead of its Tuesday release on Flipkart.

The Xiaomi Mi 3 went on sale in India exclusively via Flipkart at Rs. 13,999 starting Tuesday. The company also announced the Redmi 1S and Redmi Note will be launching in India in August.