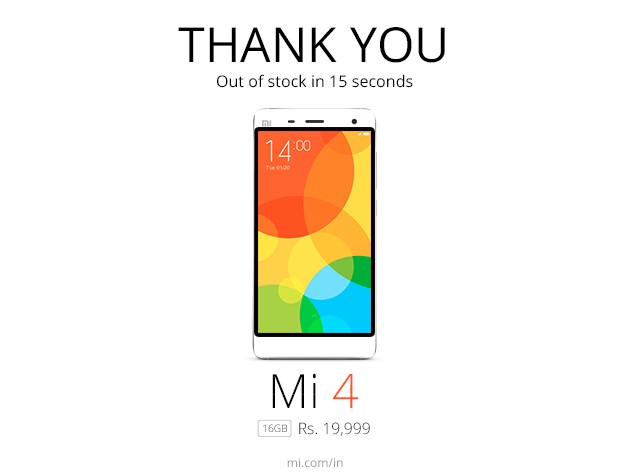 Xiaomi's 2014 flagship, the Mi 4, went up for its first flash sale on Flipkart in India at 2pm IST on Tuesday, and this time it took 15 seconds for 25,000 units to be listed as 'out of stock'. Xiaomi's Vice President of International Operations, Hugo Barra, in a tweet announced the news.

1st sale of Mi 4 today: we have received approx. 350K registrations. 25K devices will be made available for today's sale. @MiIndiaOfficial

The Flipkart page for Mi handsets note that the next flash sale is on February 17 and the registrations for the next sale will begin at 6pm IST.

The next sale on Tuesday is for the Redmi Note 4G and it will start at 5pm IST for registered users via Flipkart. The company has already revealed that 40,000 Redmi Note 4G units will be up for sale in the flash sale.

(Also see: OnePlus One v Xiaomi Mi 4: Which One Is Right for Mi?)

Xiaomi's pricing of the 64GB variant at Rs. 23,999 is also questionable, essentially providing a larger 64GB flash memory chip instead of the 16GB chip for Rs. 4,000 more - quite a premium for just 48GB of ubiquitous storage. This also prices the smartphone significantly higher than the OnePlus One, a strange move considering the smartphones are nearly equal in terms of specifications.