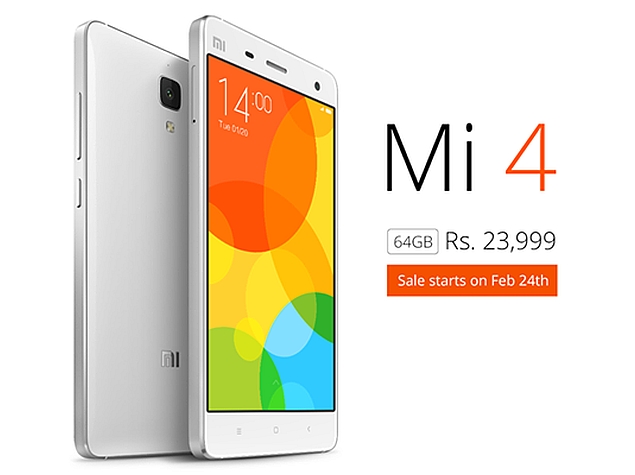 Xiaomi India has announced the price and availability of the 64GB variant of its much-awaited Mi 4 smartphone in India, the company's 2014 flagship. The 64GB variant has been priced at Rs. 4,000 more than its 16GB counterpart, at Rs. 23,999, and will be made available on February 24.

Making the announcement on the Mi India Facebook page, the Chinese smartphone manufacturer says sales of the Xiaomi Mi 4 (Review | Images) 64GB variant begin on February 24, which also happens to be a Tuesday - the traditional day for Xiaomi flash sales in India.

The announcement was made on Monday, just ahead of the company's first flash sale for the 16GB variant of the Mi 4 smartphone on Tuesday. Xiaomi had late last month launched the Mi 4 in India, and at that time had indicated that the 64GB variant would be coming soon, but had failed to provide a timeline.

With its rapid growth and almost cult status, startup Xiaomi is already one of the best known smartphone makers globally, despite only having made its devices available in select countries till date. However, the smartphone maker with its Mi 4 offering certainly has a difficult job cut out for it in India, taking on another startup that is offering top-end specifications at an affordable price - OnePlus, with its 64GB One smartphone priced at Rs. 21,999.

OnePlus is certainly aware of this, and announced that the first open sale of the One smartphone in India will occur on the same day as the first flash sale of the 16GB Mi 4 - Tuesday.

Unlike Xiaomi, OnePlus decided not to make the 16GB Silk White variant of the OnePlus One (Review | Pictures) available in India, despite the fact it could have offered the smartphone at a much lower price point and thus drawn more eyeballs. Perhaps the startup correctly estimated the tech-savvy nature of the Indian market, judging by the response the announcement of the 16GB Mi 4 has had, with several users favourably comparing the OnePlus One to the Xiaomi Mi 4.

Xiaomi's pricing of the 64GB variant at Rs. 23,999 is also questionable, essentially providing a larger 64GB flash memory chip instead of the 16GB chip for Rs. 4,000 more - quite a premium for just 48GB of ubiquitous storage. This also prices the smartphone significantly higher than the OnePlus One, a strange move considering the smartphones are nearly equal in terms of specifications. Xiaomi arguably enjoys a more famous brand name however, though with the company's value for money philosophy, it makes little sense it has decided a levy a premium for the brand.
Advertisement