Xiaomi Mi 3 Sold Out Within 40 Minutes in India, Claims Company 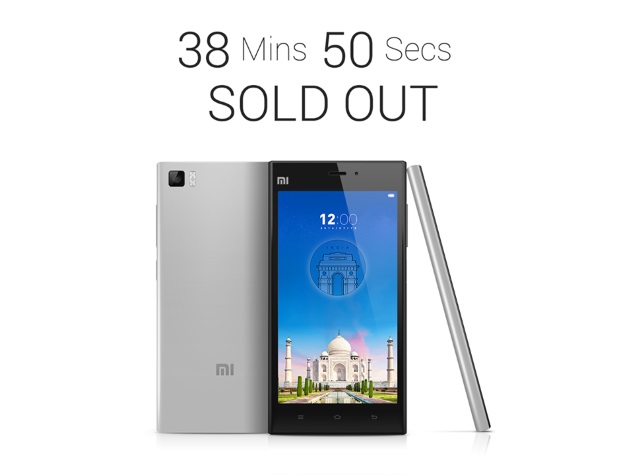 Xiaomi claims the first batch of Mi 3 smartphones in India was sold out within 40 minutes of its availability. The smartphone went on sale at 12pm IST on Tuesday via Xiaomi's exclusive online partner in India, Flipkart.

The company, also referred to as 'China's Apple', confirmed the news on Twitter and said, "Thanks for the overwhelming support! We are working hand in hand with Flipkart to improve your buying experience."

The Chinese handset maker also posted an image of the Xiaomi Mi 3 that said, "38-Minutes 50-Seconds Sold Out." It's worth noting that Xiaomi has not revealed the total number of units sold on Tuesday.

Further, Xiaomi said on Facebook, "For those who didn't get to purchase Mi 3 today, we know you must be disappointed. We want to make it up to you. For the next sale only, you'll be automatically registered in the next sale."

Earlier on Monday, Xiaomi announced that the Mi 3 received 100,000 registrations ahead of its Tuesday release on Flipkart.

Xiaomi, having a busy Tuesday, launched its latest flagship smartphone, which as expected is called the Mi 4, at the company's "The Journey of a Piece of Steel" launch event. It also launched the Mi Band budget fitness tracker priced at just $13 (roughly Rs. 790).