A new Xiaomi handset has been spotted in benchmark results tipping that the Chinese company might be working on a mid-range smartphone. Recent rumours have pointed that Xiaomi has been working on its new flagship smartphone, the Mi 5, alongside a bigger variant dubbed Mi 5 Plus.

According to the Geekbench benchmark results, the alleged Xiaomi 'Libra' smartphone will run an MIUI version based on Android 5.1.1 Lollipop. The highlight of the smartphone is seen to be the hexa-core Qualcomm Snapdragon 808 (MSM8992) processor clocked at 1.44GHz coupled with 2GB of RAM. Considering that the Xiaomi's next flagship is rumoured to pack Snapdragon 810 processor and the purported bigger variant is expected to feature Snapdragon 820 processor, we can assume that the Xiaomi 'Libra' is a mid-range smartphone. To recall, the Snapdragon 808 processor was last seen on LG's 2015 flagship, the G4. 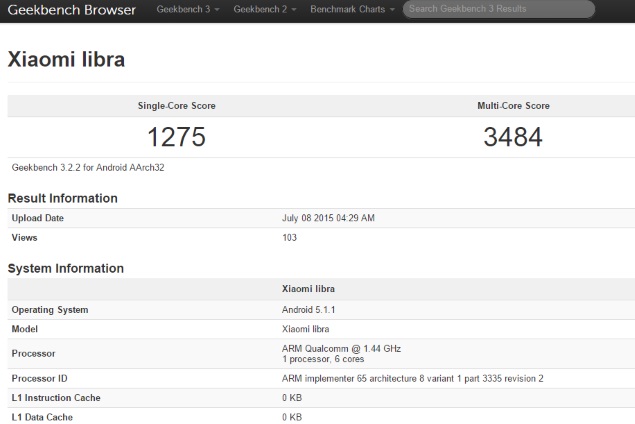 Notably, a recent report claimed that the Xiaomi 'Libra' was the codename of the company's Mi 4 successor.

Considering that none of the information has been made official by Xiaomi, we recommend our readers to take all these leaks with a pinch of salt.

The Android 5.1 Lollipop-based Xiaomi Mi 5 was previously claimed to launch in July; though recent leaks pointed to a November release. An earlier report leak even hinted that Xiaomi's next Mi 5 flagship will come with a built-in fingerprint scanner.

Study to Find What Your Tweets Say About Your Heart's Health
Strong Sales, but High Abandonment for Fitness Trackers