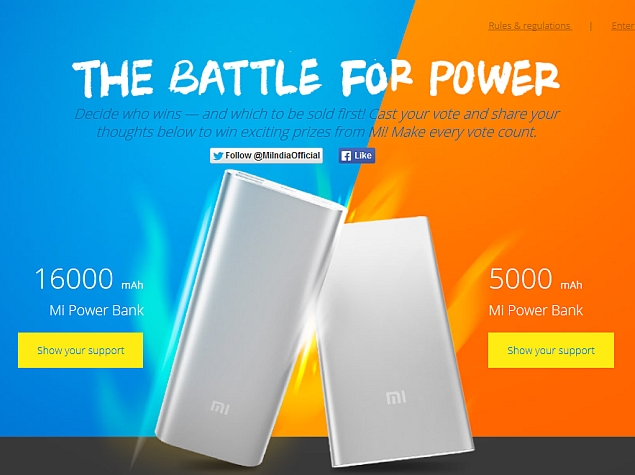 Announced via the company's Facebook page, the power banks feature anodised aluminium finish like the ones seen in other power banks released by the firm. It is worth mentioning that Xiaomi introduced its 16000mAh Mi Bank in November last year in China.

Notably, the company started selling the 5000mAh Xiaomi Mi Power Bank via its Mi.com portal in US, UK, France, and Germany earlier this month. The firm already has a 5200mAh Mi Power Bank available to buy at a price tag of Rs. 799.

The 5000mAh Mi Power Bank features one USB 2.0 port and one Micro-USB port. Measuring 125×69×9.9mm, the power bank weighs 156 grams and delivers a conversion rate same as the 16000mAh version. A per the company's claims, the portable charger can offer 5.1V/2.1A output and one full charge for Xiaomi Redmi Note 4G.

The company Facebook page also talks about a voting contest taking place on the company website. Users would have to vote for one of the two power banks, which they want to see going on sale first on June 9 - voting ends on Tuesday.

Earlier this month, Xiaomi launched the Mi 10000mAh Power Bank in China, a slimmer version of the firm's 10400mAh portable charger that was launched last year. The batteries housed inside the Xiaomi 10000mAh power bank are manufactured by LG and Panasonic, says the firm.