Share on Facebook Tweet Snapchat Share Reddit Email Comment
Xiaomi has so far launched three new smartphones this year, including the new Redmi 2, Mi Note, and the Mi Note Pro. These smartphones haven't really reached many markets; but the company seems to have more planned for this year - with what appears to be a new mid-range smartphone leaked in benchmark results.

Tech Gadgetsz.com (via PhoneArena) spotted two new benchmark listings of a new device called the Xiaomi Ferrari, which is likely to be a codename of an upcoming mid-range smartphone. According to the GFXBench results, the Xiaomi Ferrari will purportedly feature a 64-bit octa-core Qualcomm Snapdragon 615 processor clocked at 1.66GHz coupled with 2GB of RAM and Adreno 405 GPU. The handset is seen sporting a 4.9-inch full-HD (1080x1920 pixels) display while running Android 5.0.2 Lollipop; though considering that Xiaomi handsets run MIUI on top of Android, we can expect the Ferrari smartphone to also run a new version of MIUI. 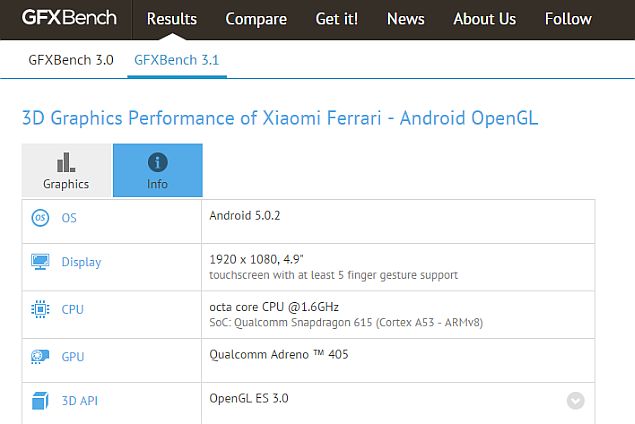 There is a 12-megapixel rear camera capable of recording full-HD videos while a 4.8-megapixel front camera is also on board. The GFXBench further tip that the handset comes with 16GB of built-in storage out of which only 12GB will be user accessible.

Considering that the popular Xiaomi Redmi 1S got a successor in the form of the Redmi 2, it is probable the Xiaomi Ferrari is the successor of the Redmi Note. Further cementing the speculation is the relatively large 4.9-inch display; though we will have to still wait for the Xiaomi's confirmation.