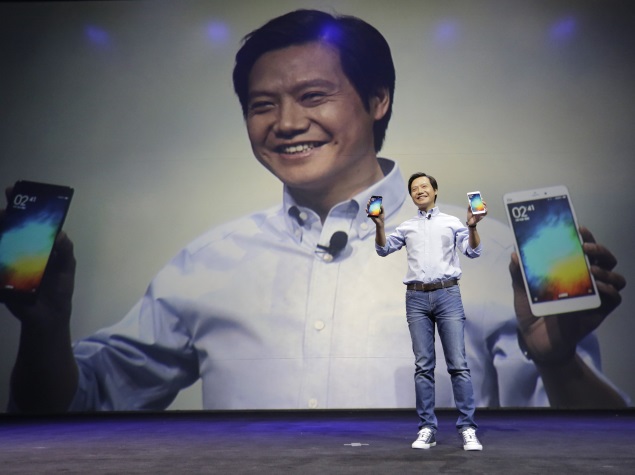 China's Xiaomi Inc staked its claim to Apple Inc's crown on Thursday as the world's third-biggest smartphone maker and most valuable tech start-up unveiled the flagship Mi Note, its challenger to Apple's iPhone 6 Plus.

Chief Executive Lei Jun introduced the Xiaomi Mi Note in Beijing with a breakdown of the large-screen phone's technical features, with multiple comparisons to Apple's equivalent. At 2299 CNY ($371) for a model with 16GB of memory, the Mi Note will retail for almost two-thirds less than the iPhone 6 Plus (Review | Pictures).

Just three years after Xiaomi sold its first smartphone, a $1.1 billion (roughly Rs. 6,839 crores) round of fundraising announced in December valued the firm at $45 billion (roughly Rs. 2,79,795 crores). The privately held company has risen to become the world's No. 3 smartphone maker and is challenging Apple and Samsung Electronics Co Ltd as well as domestic rivals such as Huawei Technologies Co Ltd.

Xiaomi takes efforts to play down comparisons with Cupertino, California-based Apple, though it is commonly called the 'Apple of China'.

"The Mi Note is shorter, thinner and lighter than the iPhone," Lei told his audience of thousands gathered in the north of China's capital.

"Xiaomi is an innovative start-up company, with a short history," said Lei. The company has been frequently criticised for allegedly copying other tech companies, most notably Apple. "In 10 years we will have tens of thousands of patents."

"In five to 10 years all devices will become smart devices," he said. "If every smart device and every device at home can be seamlessly connected to the cloud, what could our life be like? It would be beautiful and easy."

The company sold more than 61 million handsets in 2014, up 227 percent from a year earlier. In China, the world's biggest smartphone market, overall sales fell 8 percent, according to the Ministry of Industry and Information Technology.

On Monday, Reuters exclusively reported that Lei and Facebook CEO Mark Zuckerberg discussed a potential investment by Facebook in China's top smartphone maker ahead of last month's fundraising, but a deal never materialised.