Two years after its high-quality, budget smartphone won over millions of Chinese fans, domestic tech firm Xiaomi Tech wants to make more money from online shopping and games than it does from selling its handsets.

Xiaomi is better known globally as China's answer to Apple Inc, an image that billionaire Lei Jun has fostered since he founded the company in 2011 by dressing in the black tops, jeans and sneakers favoured by the late Steve Jobs.

Lei has since expanded his wardrobe options and Xiaomi sold more smartphones than Apple in the second quarter in China, the world's biggest smartphone market, according to the latest data from IT industry consultancy Canalys.

Xiaomi's low prices, however, mean its profit margins are thin and that's why Lei now wants to expand into China's mobile Internet business, estimated to be worth around $30 billion by 2015 from roughly $9 billion in 2012.

"Xiaomi looks a bit like Apple but is really more like Amazon with some elements of Google," Lei said in an interview in Beijing, dressed in a blue shirt, blue jeans and brown shoes.

"The mobile phone is only the carrier," Lei said. "Microsoft used to sell Windows in a box with a CD in it. Does that make Microsoft a paper box company?"

The popularity of Xiaomi's cheap yet sleek handsets is indisputable: its flagship smartphone, the Mi 2S, was the most popular phone inChina during the first half of the year, according to local benchmarking company Antutu. 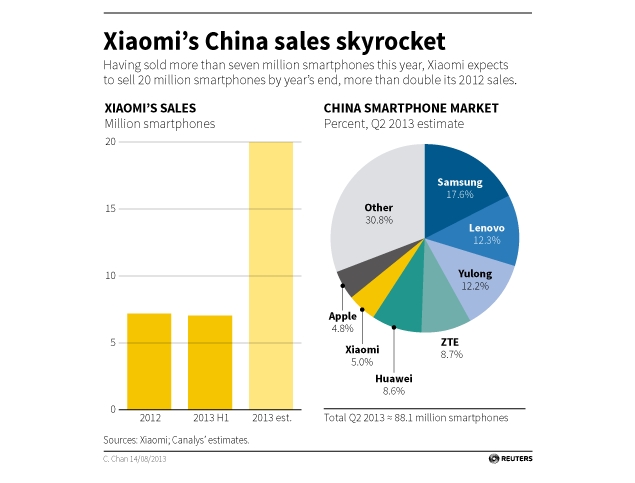 Xiaomi's latest smartphone, the Hongmi, sells for $130, much lower than the $770 price tag of the iPhone 5 or the $470 for the latest Galaxy model by Samsung Electronics Co Ltd, the market leader in China.

In the second quarter of this year, Xiaomi was ranked sixth by market share, one notch above Apple, but this lead is likely to be short-lived as the U.S. firm is expected to unveil its redesigned iPhone in September and may also release a cheaper emerging market smartphone.

Trojan horse?
The 43 year-old chief executive said it was high time for the Apple comparisons to end and the rivalry with local tech giants Alibaba GroupHolding, Baidu Inc and Tencent Holdings Ltd to start.

Xiaomi currently makes around 20 million yuan a month in revenue from its mobile Internet platform, which includes a game centre, an online marketplace and a social messaging app that competes with Tencent's popular WeChat.

In the first half, that figure was equivalent to less than 1 percent of monthly revenue, company data shows.

Lei estimated mobile Internet revenue may rise to as much as 150 million yuan a month by the end of next year as Xiaomi develops what he called its software ecosystem.

He declined to give specific details, but said Xiaomi had the hardware it needed to expand into online services.

Industry experts warn Lei's big ambitions may be dwarfed by the size of his competitors and their already established mobile Internet offerings.

Most Chinese consumers are also accustomed to free downloads and won't pay for software, making it difficult for companies to make money that way, said Michael Clendenin of Shanghai-based IT consultancy RedTech Advisors.

"Apple has a great ecosystem, but that's created to keep people on their hardware. Not the other way round," he said.

Xiaomi has been valued at up to $10 billion, while Tencent, China's largest Internet company by revenue, has a market capitalisation of $88.6 billion.

Baidu, the owner of the country's biggest search engine, is worth $49.5 billion while the impending IPO of Alibaba, the country's leading e-commerce company, may value the firm at more than $100 billion.

Tencent's social messaging app WeChat is used by over half of all Chinese smartphone users and Alibaba's Taobao is one of the world's top 20 most visited websites. Sina Corp's Weibo is the dominant microblogging platform, making it hard for Xiaomi to compete in all these segments, Clendenin said.

"If Lei believes that creating a great phone and then trying to use it as a Trojan horse to dethrone Tencent and similar companies, I think he's got quite a battle ahead of him," he added.