Black Shark 2 – the next gaming smartphone from the eponymous Xiaomi-backed company – is all set to be officially unveiled on March 18, 2019. Ahead of the launch, the company has released a pair of teaser posters which confirm that the Black Shark 2 will be powered by the Qualcomm Snapdragon 855 SoC, ticking alongside a hefty 12GB of RAM. Moreover, registrations for the Black Shark 2 have gone live in China and they indicate that the upcoming smartphone will be available in three storage configurations.

The official teasers for the Black Shark 2 confirm that the upcoming gaming smartphone will pack 12GB of RAM. An image of the Snapdragon 855 SoC on the poster leaves no iota of doubt that the upcoming gaming smartphone will be powered by Qualcomm's top-of-the-line processor. The Black Shark 2 was recently spotted on Geekbench packing 12GB of RAM, while its AnTuTu visit also revealed the same amount of RAM ticking alongside the Snapdragon 855 SoC. 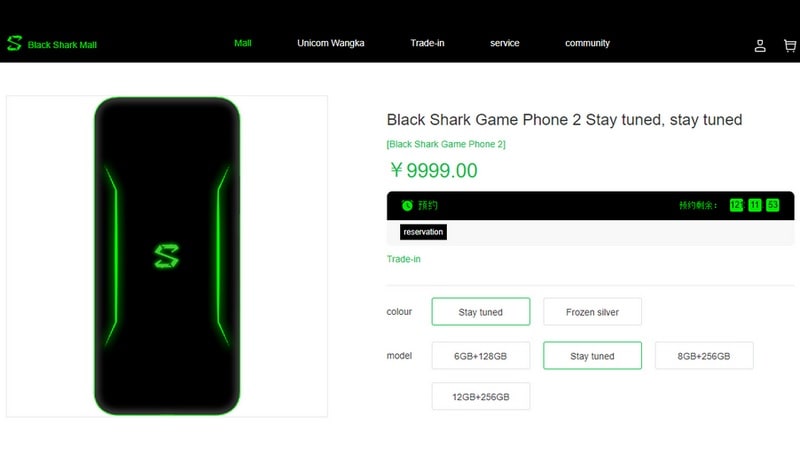 The price of the smartphone is listed at CNY 9,999 (around Rs. 1,03,653), however, we suspect it to be a mere placeholder keeping in mind the price of its predecessor. Moreover, the image on the listing page suggests that the Black Shark 2 will feature a backlit logo as well as illuminated strips running on both sides. Finally, Xiaomi President Lin Bin shared a screenshot of the smartphone's home screen.

The Xiaomi-backed company has already confirmed that the Black Shark 2 will come with Liquid Cool 3.0 technology for thermal management, however, the improvements it brings to the table are yet to be revealed. The silhouette of the Black Shark 2 on the teaser poster indicates that it will feature a curved design with sharp lines on the rear panel similar to the original Black Shark gaming smartphone.