webOS reborn as GRAM; to focus on software, UX and cloud 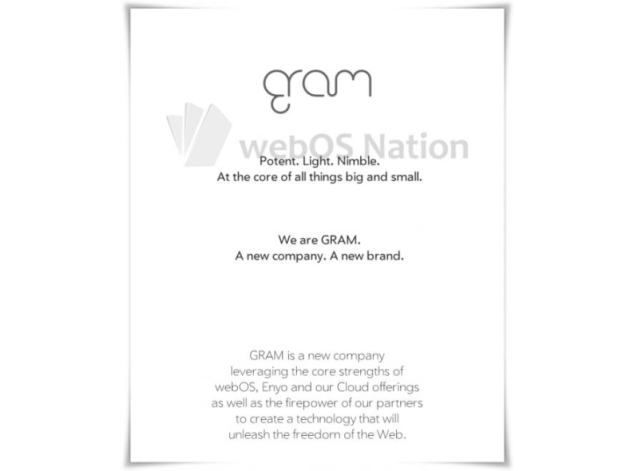 The purchase of Palm and webOS hasn't turned out to be a joyride for HP. The company killed off webOS hardware last year and announced that it will open-source webOS. However, the fate of the webOS general business unit was unclear until now.

Now, we are hearing that webOS along with Enyo and its Cloud services are going to be re-branded as GRAM and would work as an independent company. Although it will be funded by HP, GRAM will work as a separate entity. Apart from re-branding, there is hardly any clarity of on GRAM's future course of action.

According to a leaked internal memo, GRAM is taking the start-up approach and it will be focusing on software, user experience, cloud, engineering and partnering.

The online reports suggest that GRAM will be based in HP's Sunnyvale office, which was also the last known base of webOS general business unit.

webOS was originally launched in January 2009 by Palm as the successor to Palm OS. It was later acquired by HP in April 2010, which planned to develop and use webOS in multiple devices including smartphones, tablets and PCs.

When things did not go as planned, HP killed off the hardware division of webOS in August 2011 and announced the plan to make webOS open-source in December 2011, which is scheduled to complete next month.