The teasers also confirm that the Vivo Z5 will come wih Multi-Turbo and fast charging support as well. 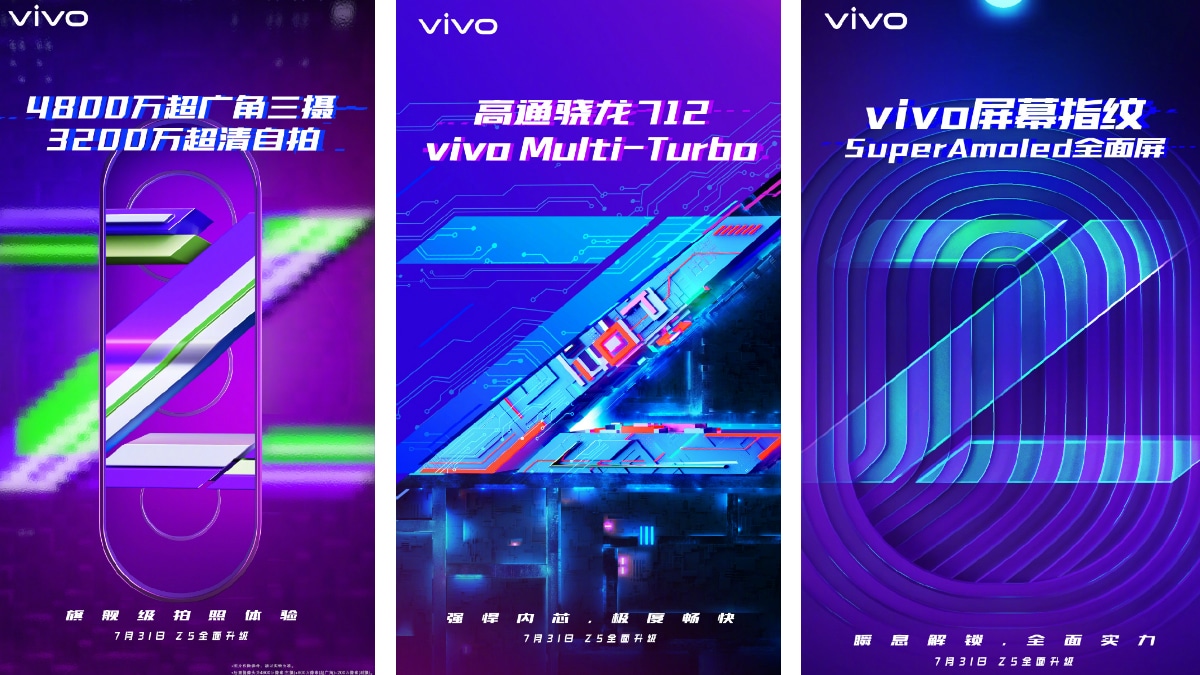 Vivo Z5 is all set to launch next week

Vivo Z5 is all set to launch on July 31. Several new teasers have now been released by the company revealing key specifications details. The new teaser posters confirm that the phone is powered by the Snapdragon 712 processor, and packs a 4,500mAh battery as well. It also teases support for 22.5W fast charging, something that was leaked just a day ago. The phone has been leaked on TENAA revealing full specifications as well, and the renders have been released revealing design details.

Vivo has taken to Weibo to share several teaser posters of the Vivo Z5 phone. The phone is listed to be powered by the Snapdragon 712 SoC in one teaser, along with Multi-Turbo support for smooth gaming sessions. Another teaser poster suggests that the phone will have a triple rear camera setup, something that has already been confirmed by official renders. The new teaser confirms that the rear camera setup will include a 48-megapixel sensor, and the phone will sport a 32-megapixel selfie sensor as well. The Vivo Z5 is also teased to sport a Super AMOLED display, and pack 4,500mAh battery. The phone will support 22.5W fast charging as well.

Official renders released recently confirm that the Vivo Z5 will come in three glossy gradient finishes – Green, Blue, and White. The triple rear camera setup will be aligned vertically with a flash module sitting below the sensors. There is no rear fingerprint sensor, hinting that it may be embedded underneath. Up front, the phone is seen sporting a waterdrop-style notch with a slight chin at the bottom of the display.

A TENAA listing suggests that the Vivo Z5 triple camera setup is listed to include a 48-megapixel main camera, assisted by a 2-megapixel and 8-megapixel cameras. The listing also tipped that the phone will feature a 6.38-inch (1080x2340 pixels) AMOLED display, a 2.3GHz octa-core processor, 6GB and 8GB RAM options, 64GB and 128GB storage options, and measure 159.53x75.23x8.13mm.