Vivo Z1x Launch in India: Price in India, Specifications, and Everything Else We Know So Far

Vivo Z1x will be the company's next phone in its Z-series in India and will join the already available Z1 Pro.

Vivo Z1x is set to become the Chinese smartphone company's next phone in its Z-series lineup in India. The phone is set to launch in India on September 6 as a Flipkart exclusive. Ahead of its official launch, both Flipkart and Vivo have been teasing some of the key specifications and features of the upcoming smartphone. Just last week, the full specifications of Vivo Z1x were leaked online. Vivo Z1x is expected to be a mid-range smartphone with an interesting set of features. To recall, Vivo debuted its Z-series lineup in India earlier this year, with the Vivo Z1 Pro. The Vivo Z1 Pro was targeted at gamers, featuring the Qualcomm Snapdragon 712 SoC, up to 6GB of RAM, a 5,000mAh battery, as well as a Game Mode 5.0 feature. Another highlight of the Vivo Z1 Pro is its triple rear camera setup.

As mentioned earlier, Vivo will launch the Vivo Z1x in India on September 6. The phone will be exclusive to Flipkart for online sales. The company announced the launch date last week. As we've detailed before, this will be the second Vivo Z-series smartphone to make its way to India, and thus far, the affordable lineup looks to be focused at gamers and photography enthusiasts. Stay tuned to Gadgets 360 as we'll be bringing you more details when Vivo Z1x goes official later this week. In the meanwhile, read on for more details about the Vivo Z1x , including its expected price in India, as well as its expected specifications.

We already know a lot about the Vivo Z1x but its price in India still remains a mystery. But on the surface, the Vivo Z1x looks like a rebranded version of the Vivo Z5. The Vivo Z5 was launched in China last month at a starting price of CNY 1,598 (roughly Rs. 16,000) for the 6GB RAM, 64GB storage variant.

The only other Z-series phone in India, as we mentioned, is the Vivo Z1 Pro. The smartphone was launched in July, and was made available in three separate variants. The 4GB + 64GB variant is priced at Rs. 14,990, while the 6GB + 64GB and 6GB + 128GB models are priced at Rs. 16,990 and Rs. 17,990 respectively. The smartphone is available via the Vivo India E-Store and Flipkart. 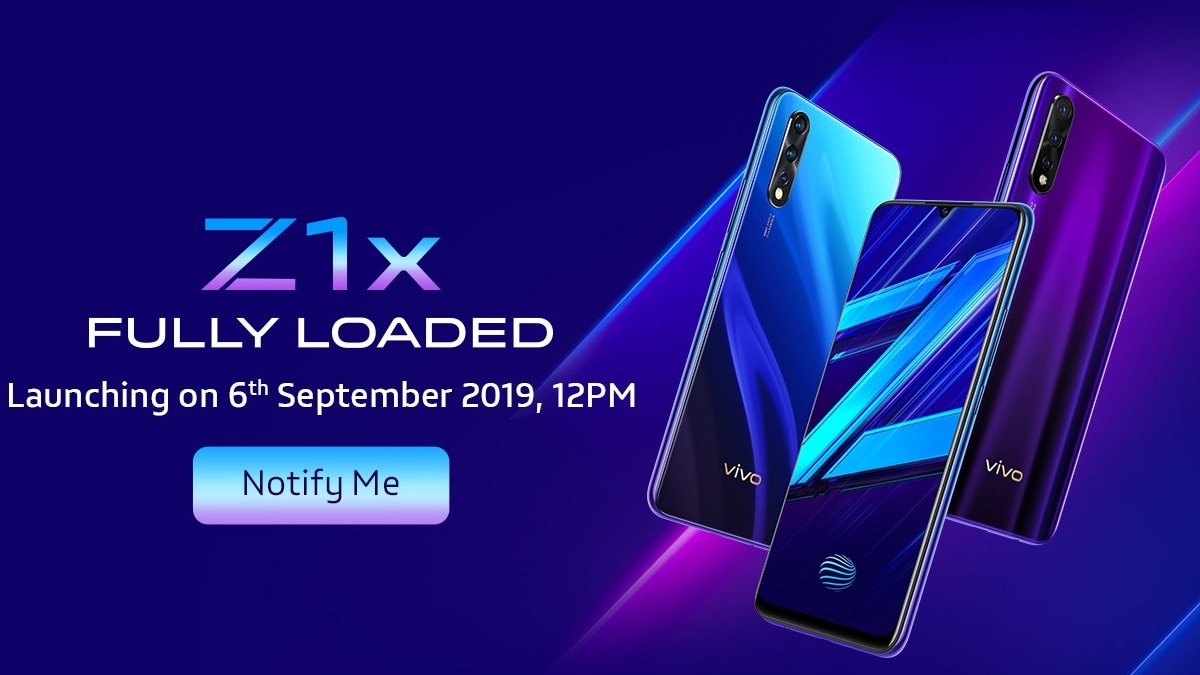 Vivo Z1x will feature 22.5W Vivo FlashCharge technology that promises 3-hours worth of talk-time with just 5 minutes of charging. The phone will come with an in-display fingerprint sensor. Vivo claims it can unlock the phone in just 0.48 seconds.

Last week's leak indicates that the Vivo Z1x will run Android Pie out-of-the-box and will come with a 6.38-inch full-HD Super AMOLED display. The phone is likely to arrive in 64GB and 128GB storage variants, with 6GB of RAM. Vivo Z1x may come with a 4,500mAh battery.

As for the cameras, the upcoming Vivo Z1x is expected to feature three rear cameras. That can be confirmed by looking at the official teasers Vivo has been sharing recently. The camera setup is expected to feature a 48-megapixel primary sensor consisting of the Sony IMX582 sensor. The second camera will be an ultra-wide angle sensor and the third is likely to be a depth-sending camera. On the front, the tiny display notch will include a 32-megapixel selfie camera, according to the leak.

Vivo Z1x Launch in India: Price in India, Specifications, and Everything Else We Know So Far
Comment
Read in: हिंदी