Just earlier this month, Vivo launched the Y93 smartphone with a Qualcomm Snapdragon 439 SoC, 4GB of RAM, 64GB of inbuilt storage, 6.2-inch display, and a dual rear camera setup. Now, a new leak hints that the company is already gearing up to launch its successor called Vivo Y95, and the smartphone will see slight upgrades, particularly in the camera department. Importantly, the Vivo Y95 is seen sporting a rear fingerprint scanner, something that was missing on the Vivo Y93 smartphone.

AndroidPure has gotten hold of retail box and hands-on images of the Vivo Y95. The report also notes specifications listed on the retail box, and it states that the Vivo Y95 runs on Android 8.1 Oreo based on Funtouch OS, and is expected to sport a 6.22-inch Halo Full View HD (720x1520) display. It is listed to be powered by Qualcomm Snapdragon 439 octa-core SoC paired with 4GB RAM. Internal storage is at 64GB, with support for expandable storage via microSD card slot.

MySmartPrice has published retail box and promo images for the upcoming Vivo Y95 smartphone. The retail box images match those leaked by Android Pure. The images suggest that the Vivo Y95 will be pretty similar to the Y93, and it is seen sporting a waterdrop-shaped notch, and a vertically stacked dual camera setup at the back. It is also seen sporting a rear fingerprint sensor, something that was missing on the Vivo Y93 smartphone. The Vivo Y93 had facial recognition, but lacked a fingerprint sensor. 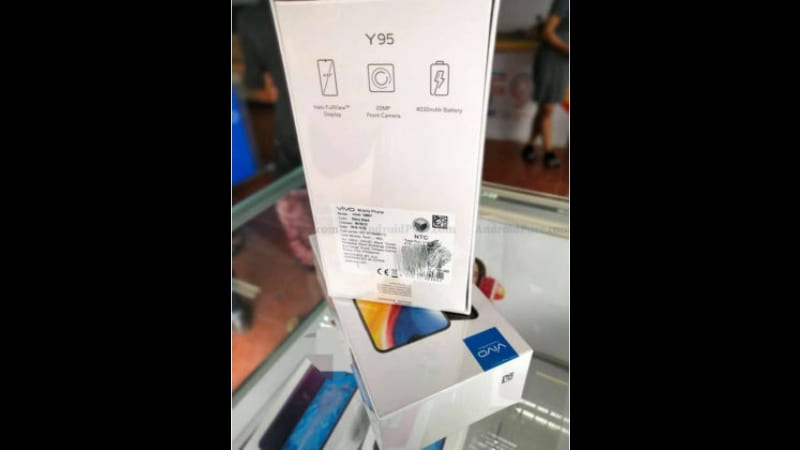 Optics are listed to include a dual camera setup at the back - with one 13-megapixel sensor and another 2-megapixel sensor with support for LED flash. At the front, there is an upgraded 20-megapixel sensor. The smartphone is listed to pack a 4,030mAh battery. The report states that the Vivo Y95 is slated to launch in India soon, and may arrive in other markets at a later date. Pricing of the device is still a mystery.

Further reading: Vivo, Vivo Y95, Vivo Y95 Image Leak
Tasneem Akolawala Email Tasneem Tasneem Akolawala is a Senior Reporter for Gadgets 360. Her reporting expertise encompasses smartphones, wearables, apps, social media, and the overall tech industry. She reports out of Mumbai, and also writes about the ups and downs in the Indian telecom sector. Tasneem can be reached on Twitter at @MuteRiot, and leads, tips, and releases can be sent to tasneema@ndtv.com. More
Twitter CEO Says Taking Multiple Steps to Curb Fake News Before 2019 Elections in India