Vivo Y70s May Be the First Smartphone With the Unannounced Exynos 880 5G Chipset: Report

Vivo Y70s is expected to come with 18W charging support and Android 10 out of the box. 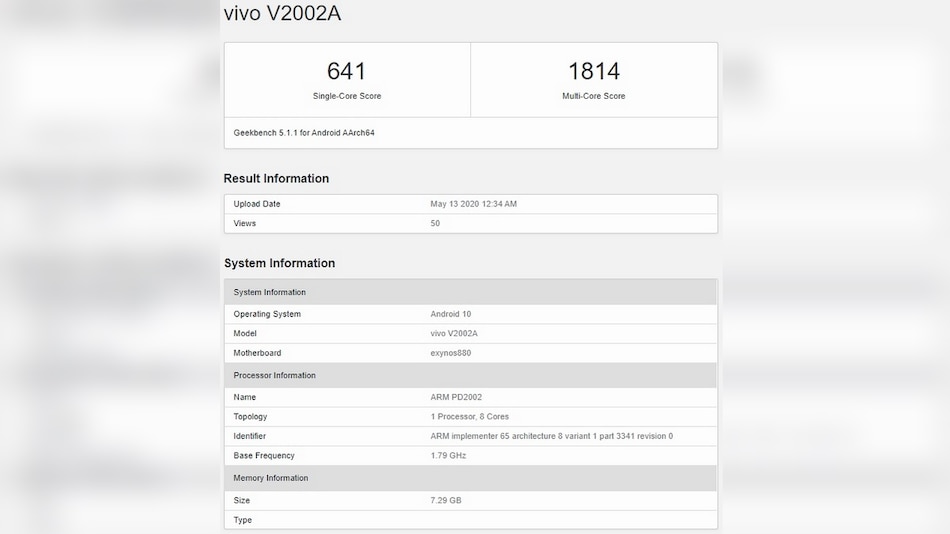 Vivo Y70s is expected to have 5G support

Vivo Y70s may be an upcoming smartphone in the company's Y series but what's more interesting is that it may be powered by the unannounced Exynos 880 SoC. According to a new report, a phone with model number vivo V2002A has been spotted on Geekbench and is expected to be the Vivo Y70s (not the official name). The listing also shows that the phone is powered by the Exynos 880 SoC making it the first phone with this yet to be announced chipset. The Geekbench listing shows some other information about the phone as well.

The Geekbench listing, as well as details about the SoC, were posted by known tipster Digital Chat Station (translated) on Weibo. It shows a Vivo phone with model number ‘vivo V2002A' listed with the octa-core Exynos 880 SoC with a base frequency of 1.79GHz. It also states the phone is running Android 10. Notably, the listing is from Wednesday, May 13 and shows a single-core score of 641 and a multi-core score of 1,814. Gadgets 360 was able to independently verify this listing.

Talking about the details of the Exynos 880 SoC, the tipster states that it is a 5G compatible SoC with two Cortex-A77 cores clocked at 2.0GHz and six Cortex-A55 cores clocked at 1.79GHz. The GPU will be the Mali-G76. As of now, Samsung has not announced this new mobile processor.

According to a report by MyFixGuide, the alleged Vivo Y70s was spotted in China's 3C certification site as well with the same V2002A model number, along with two other phones, V2001A and V2005A. While the V2001A and V2005A were seen to have 33W fast charging support, the V2002A phone expected to be the Vivo Y70s, was seen with support for slower 18W charging.

It should be noted that Vivo has not made any announcements regarding the Vivo Y70s or even confirmed the name so, this piece of information should be taken with a pinch of salt.