Vivo X50 retail box has also been leaked, but because of its poor quality, the design is difficult to assess.

Vivo X50 has leaked in multiple fresh leaks online, hinting at a probable launch in the future. For starters, the Vivo X50 branding was spotted during a reality show in China, and a blurry image of the phone's retail package was also leaked. There is also a new promo image leak on the Chinese social media site Weibo, and a separate image leak wherein the name of the phone is not mentioned, but it looks to be similar to what little can be seen in the retail box leak.

Starting with the Vivo X50 moniker on the reality show, Gizmochina reports that new branding in a reality TV show named ‘Go Fighting!' in China has been spotted. The report shares an image wherein the Vivo X50 branding can clearly be seen on stage. This suggests that Vivo has already started marketing the device in the region, and launch may happen soon. Vivo is known to start marketing its devices ahead of launch, and looks like the Vivo X50 is receiving the same treatment.

There is also a blurry image of the Vivo X50 retail box that has been leaked, and because of its poor quality, the design is difficult to assess. Even then, the retail box suggests 5G support, a light blue colour gradient panel finish, and a rectangular-shaped camera module sitting on the top left of the back panel. A separate image leak on Weibo from Vivo X50 promotional material shows a hole-punch display on the top left corner of the screen. This image is also very pixelated, and details regarding rear camera sensors are smudged out of focus. 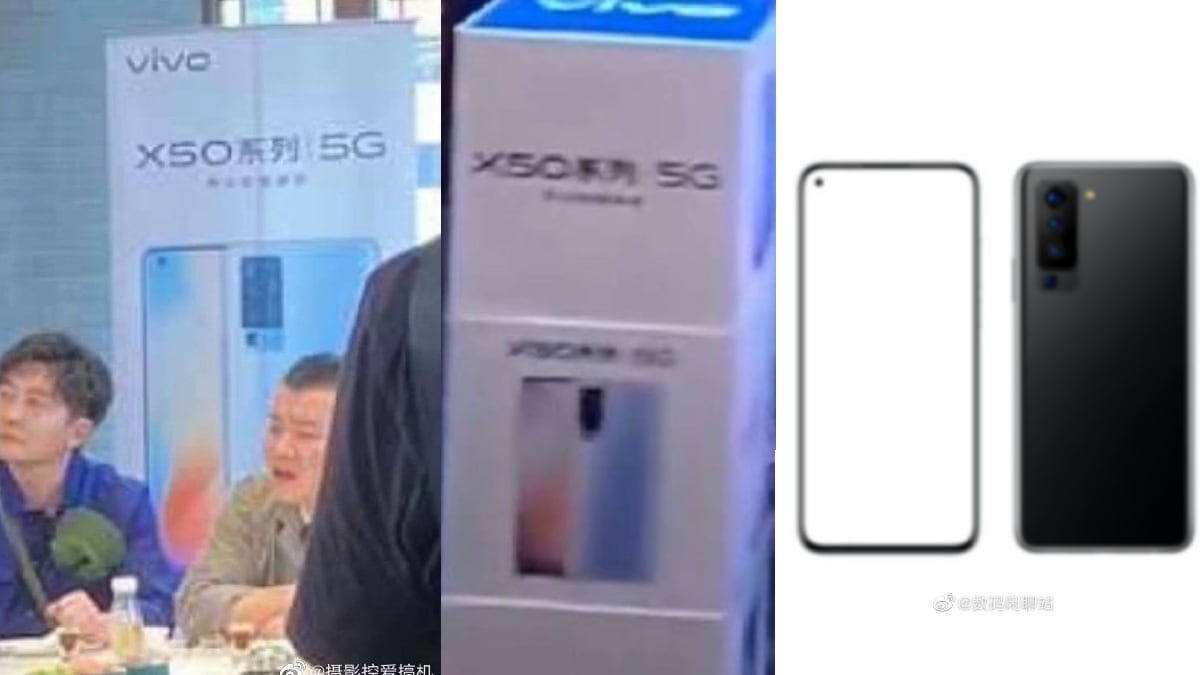 Vivo has not made any announcements regarding the Vivo X50
Photo Credit: Weibo

Separately, there is another leak on Weibo showing the front and back of an unknown smartphone, and judging by the looks of it, it looks similar in design as that shown in the promo leak. This leak, unfortunately, is also of very poor quality, but four camera sensors at the back can be seen sitting vertically one below the other. Vivo has adopted a dual-shade rectangular camera module design with one sensor sitting in a slightly lighter shade, while the others are on a darker surface. The hole-punch display can be seen on this leaked model as well. Again, we aren't sure whether this is an image leak of the Vivo X50 or not, and we recommend you take this lightly.

There is no word from Vivo regarding the launch of the Vivo X50, but given that so many leaks have cropped up, along with branding on a reality show, the launch should be soon.

Further reading: Vivo X50, Vivo X50 5G, Vivo X50 Launch, Vivo X50 Image Leak, Vivo X50 Design, Vivo
Tasneem Akolawala Email Tasneem
Tasneem Akolawala is a Senior Reporter for Gadgets 360. Her reporting expertise encompasses smartphones, wearables, apps, social media, and the overall tech industry. She reports out of Mumbai, and also writes about the ups and downs in the Indian telecom sector. Tasneem can be reached on Twitter at @MuteRiot, and leads, tips, and releases can be sent to tasneema@ndtv.com. More
Realme Watch Officially Teased, Expected to Launch in India Soon
France to Force Web Giants to Delete Some Content Within the Hour