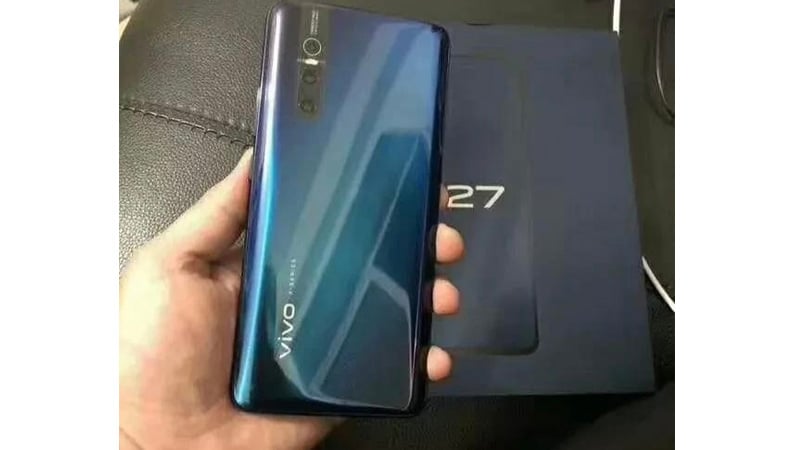 The alleged back shot of the upcoming Vivo X27 smartphone

We've been hearing murmurs off late about Vivo planning to launch a new smartphone, dubbed the X27, for the Chinese market. The phone is said to be based on the V15 Pro, which features a pop-up selfie camera. Some fresh, live images have now surfaced online and one of them might actually be a shot of the phone in question. The Vivo X27 is set to be launched in the company's home market on March 19.

A Weibo forum member going by the name of JohnDragon has posted a series of pictures on the Chinese social media platform, claiming them to be live images of the Vivo X27, as reported by GizmoChina.

Out of the four images, the first one appears to be the same wallpaper that Vivo had recently used in a teaser to announce the launch date of the phone as March 19. The other two pictures are of the Vivo V15 Pro, which appear to be taken straight from an article from The Verge. In fact, one of the images still has the tech website's watermark in the bottom right corner.

The fourth image though, is the most interesting. It shows the back of a phone with a similar three-camera setup but the Vivo branding is vertically aligned instead of a horizontal alignment. We've seen other Chinese companies such as Realme and Oppo adopting this new branding style as well, in their recent offerings such as the Realme 3 (Review) and the Oppo F11 Pro. Then, there's also the box in the background with the big '27' lettering, with the pre-fix conveniently hidden.

The Vivo X27 is likely to be a rebranded version of the Vivo V15 Pro (Review) but it is likely to differ from the original in certain aspects. As per the TENAA listing, the Vivo X27 is said to come with 8GB of RAM, 3,920mAh battery, and up to 256GB of inbuilt storage. Additionally, the phone is said to run on Android 9 Pie and feature an in-display fingerprint sensor as well as have support for fast charging.